With a somewhat unusual animated opening, Halloweed, directed by LazRael Lison, doesn’t take long to prove there is nothing unique about dicks, boobs and butt jokes.

As it sounds, Halloweed is a stoner comedy cashing in in time for the spooky season. It centres on two stepbrothers Joey (Simon Rex, Scary Movie 3, 4 and 5) and Trent (Shannon Brown, Friends) who start up a new adventure in a notorious small town called Mooseheart, a town known to be haunted. Haphazardly the pair find board, jobs, a girlfriend and unravel a pretty predictable murder mystery along the way.

For what is handled in a pretty beginning, middle and end setup, Halloweed has major problems. For one, caricatures. As such you get a clichéd crazy old man named Lloyd (Robert Craighead), who the stepbrothers board with. Lloyd lives in a junkyard looking setup, wears Daisy Duke shorts and ironic vintage tops. He is depicted as gross and not all there. Or the character Quincy played by Jason Mewes. He is a weed enthusiast, quite similar to his other back catalogue from Kevin Smith. Halloweed even goes perhaps into racist territories by using actor Danny Trejo as the town’s drug provider. Trejo plays Patch who wears Mexican gang mimicry. These characters are flat and don’t give anything else to go by but horrible attitude. 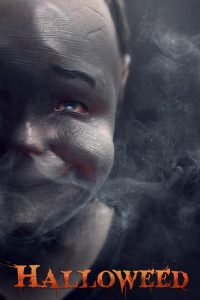 If I had to find some kind of happy medium the characters Sherriff Johnson (Lester Speight) and Deputy Thompson (Deja Dee), who are black, are handled respectfully and are not one-dimensional. These characters are not your typical crooked cops and seem to go about their jobs in the most logical way.

Another point of conflict is the humour. It is quite conservative, really. Halloweed is like being stuck in a room full of Donald Trump-isms. It is narrow-minded and immature, to the point of hearing the phrase “Fucking Immigrants” uttered by the character Judge Pilmington (Ray Wise, better know as Leylon Palmer in Twin Peaks). It’s said in such a way that doesn’t seem to be used for satire or brought into context as a point of anxiety that the character obviously has.

It is quite frustrating to witness comedy used in this manner, which feeds off this idea of ‘liberation’ and freedom by using lowbrow humour when it is simply a guise of right wing politics. It is far from more effective examples like the juvenile delight of This is the End or the TV series South Park, which beautifully lets us laugh, and challenge what is deemed as clearly inappropriate to the senses.

Halloweed is a step backwards. You have to wonder who the audience is and how screenwriters Michael Bussan and Dale Zawada were okay about this. If this is meant to be for a ‘typical’ male audience obsessed with jokes about hand jobs in the same vein as say, South Park, I beg to differ. Generally speaking a South Park audience would also have to be quite media savvy and politically conscious. Then again, I’d hope most of us are. I still can’t work out who would actually enjoy this.

I might be taking this too serious when you compare the film’s jeer and the title, but every film should be properly analysed. Trust me, there is something wrong when weed is infused with trying to make America great again.

Halloweed is available on VOD 18th October and on DVD 8th November through Screen Media Films.