There’s something a little off-putting about a Woody Allen film these days. His constant relevance (at least one project a year) means the conversations about his alleged inappropriate relations with his children are never far apart from the release of his many films. He has distanced himself slightly with a plethora of avatars stepping into the roles he once would have cast himself in: Owen Wilson in Midnight in Paris, Colin Firth in Magic in the Moonlight. Café Society sees Jesse Eisenberg take over the role of his neurotic New York Jew again for the first time since 2012’s To Rome With Love. And all started well enough.

Eisenberg plays Bobby, a directionless young man who moves to Hollywood in pursuit of a career in the pictures. Hot-shot producer and uncle Phil Stern (Steve Carell) finds him a role running errands and introduces Bobby to the lovely Vonnie (Kristen Stewart) with whom he falls instantly and madly in love. There’s only one problem; Vonnie has a boyfriend.

The chemistry between Stewart and Eisenberg is undeniable with this being the latest in a string of films in which they have starred together. The film follows their relationship over the course of much of their lives, moving between the glitz and glamour of Hollywood and the underbelly of gangster-ridden New York, serving as a romantic homage to classic Hollywood and 1930s America. 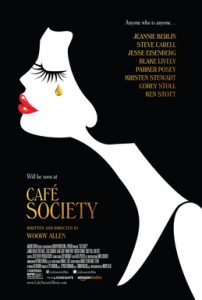 Although the film as a whole feels somewhat segmented, moving between set pieces and flashbacks with seeming randomness, it is a quaint, charming Woody Allen film but for the one element which seems too often to dominate his films of late; the striking age difference between his leading woman (Stewart) and her leading man (the aforementioned boyfriend). Moonlight saw a spritely 25 year old Emma Stone being wooed by a charming, debonair, 54 year old Colin Firth, last year’s Irrational Man once again saw Stone squaring off with a 40-something Joaquin Phoenix. So when Bobby starts to win the heart of young Vonnie I thought “Finally, Stewart and Eisenberg are a similar age, they don’t instantly make me think the director of this film is a lecherous old man.” That is until we are introduced to Vonnie’s boyfriend. From here on out it’s hard to like any of the characters and their motivations; their actions and indeed the very core of their characters is tainted by the suggestion of impropriety of the film’s maker. How can it be that a man so prominent in the industry’s zeitgeist can constantly pair inappropriately aged lead actors together?

Much, much later in the film Eisenberg meets Veronica (Blake Lively), who oozes the kind of easy sexual charisma, mid-west charm and wit of some of the best flappers 1930s New York had to offer, sadly underused as a place holder in a much grander tale of unrequited love. The supporting cast form a superb motley crew from Bobby’s gangster brother Ben (Corey Stoll), his sweet, bickering parents (Jeannie Berlin and Ken Stott), philosophical intellectual brother-in-law Leonard (Stephen Kunken) and Parker Posey‘s effortlessly sophisticated New Yorker Rad. Suzy Benzinger‘s costumers are divine, and a real star of the piece.

The question of whether one can enjoy a film and detest its maker is one that will plague audiences come Oscars season judging by the current favourites, and one which this reviewer is still struggling with. However uncomfortable, Café Society is a charming if not one dimensional homage to a favourite period of cinema, fashion and music, packed with stellar performances and an equally stellar soundtrack.

Café Society is in cinemas from 20th October through Entertainment One.