While Boys in the Trees is certainly very stylish, this film leaves a lot to be desired in the narrative stakes.  Solid performances, lush cinematography, a pulsing soundtrack and tight editing simply aren’t enough to rescue this feature debut from local director Nicholas Verso.

Set in 1997, Boys in the Trees is about a group of suburban teenagers on their last day of high school, a day which happens to coincide with Halloween.  Lead protagonist Corey (Toby Wallace) is an aspiring photographer; with an application to a university in New York pending, he is obviously hoping to get out of the ‘burbs for something more stimulating.  He is clearly at odds with his mate Jango (Justin Holborow) and their crew, who are nothing more than skate-park bullies.  When Jango and the gang prey on the vulnerable Jonah (Gulliver McGrath), Corey hesitates but ultimately partakes in the intimidation.

After covering the suburb in toilet paper and smashed eggs, the gang eventually settle in the cemetery to drink and smoke. When Jango lecherously shares a joint with Corey’s love interest Romany (Mitzi Ruhlmann), Corey is plainly unimpressed and takes his cue to break away from the gang.  On departing the cemetery, he encounters Jonah and agrees to walk him home.  On route, it is revealed that Corey and Jonah were childhood friends, and they renew a game of fantasy which they played as children.  The game involves trying to scare each other silly, and now serves to highlight their teen anxieties and fears.  As the night wears on, lines between reality, memory and fantasy begin to blur. 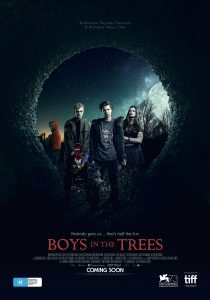 Presumably the metaphor underpinning the film is the ‘nightmare’ transition from boyhood to manhood, and, more generally, the pain of the dreadfully liminal state of adolescence. As Corey and Jonah reconnect, they talk about not wanting to grow up, fearing the parts of themselves they will leave behind and what the future will hold.  Director and writer Verso simply lays this on too thick.  While performances from Wallace, McGrath, and Holborow are very good, the dialogue is bad to the point of ridiculous.  Long monologues are unconvincingly articulate, simply unbelievable coming from teens of any era.

There seems to be some confusion on the part of the filmmaker as to where and when this film is set; there are multiple references to Melbourne, yet the filming took place in South Australia. Meeting under the Flinders Street clocks, staying in Box Hill – all allusions to Melbourne.  While the film is obviously Australian, many references are made to various aspect of American culture.  Although popularity of Halloween is growing in Australia, in the mid 1990s there was very little interest.  Sure, for the purposes of film making we can overlook such details, but when so much effort has been made to situate this film in 1997 – dial up modem, specific soundtrack – this actually grates.  As does the use of an indigenous man dressed in New Orleans style voodoo costuming as the face of death and the awkward placement of a Mexican day of the dead party.  Such imagery serves to undermine other, more convincing, fantastical elements.

Visually this film is quite sophisticated, and although frustrating to watch, Boys in the Trees suggests Verso shows a great deal of promise.  There is a homo-erotic undertone to Corey’s relationships with both Jonah and Jango which is quite interesting, and delicately handled. Good use of location shows a sense of resourcefulness and the soundtrack demonstrates intuition.  Look out for nice cultural references, such as a nod to Boo Radley from To Kill a Mockingbird.

Boys in the Trees is in cinemas from 20th October through Mushroom Pictures.

Written By
Amy Taylor
More from Amy Taylor
Colossal is the third feature film from writer-director Nacho Vigalondo, and is part...
Read More