To steal a quote from Ben “Yatzee” Croshaw –  Dante’s Inferno is history’s first recorded work of self-insert fan fiction. Born 750 years ago, Dante Alighieri was a Florentine poet whose work The Divine Comedy came up with a concept of what hell, purgatory and heaven looked like. The idea that hell is a fiery chasm filled with sinners screaming in pits of molten lava and heaven was a place in the clouds where angels pluck harps and have feathered wings was his idea, so it speaks volumes about the brilliance of his epic poem that these ideas remain unaltered 700 years later.

It’s been five years since Ron Howard directed Tom Hanks as Robert Langdon, Dan Brown’s Mary Sue character that stars in four of his six novels. The third adaptation of a Dan Brown novel after The Da Vinci Code and Angels and Demons (speaking of which, what ever happened to the adaptation of The Lost Symbol?), Inferno begins with Robert Langdon waking up in a hospital room in Florence with no memory of how got there. Just like every book Dan Brown has ever written, the events that transpire involve a 24 hour deadline involving a theological McGuffin  with Langdon and his gal pal of the week, here played by Felicity Jones as the doctor who looks after Langdon in hospital, running away from bad guys and visiting European landmarks.

This is the third time that this exact plot has been dusted off and it wasn’t that great the first time it was tried. The Da Vinci Code was released in 2003 and with its plot revolving around the idea that the Holy Grail was actually Mary Magdalene; the woman Jesus Christ had a baby with, it sat in that sweet spot of being so controversial it make news headlines but not so controversial that it affected the film’s box office performance. It ended up being a misjudged, muddled bore and possibly the darkest film ever made – not in a thematic way; the film is so poorly lit it was really hard to see what was going on. It’s like the filmmakers forgot to hire a gaffer and lighting crew. 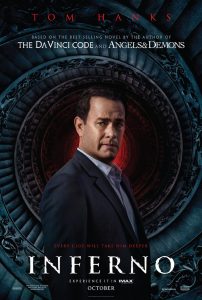 Not much has changed since 2003, although you can actually see what is going on in Inferno which is a marked improvement. All the classic Dan Brown tropes are here – art, exposition and running. Tom Hanks runs away from bad guys, then goes and looks at a painting, then explains the plot, and then they run some more. Instead of the Vatican and Paris, here we get to see the streets of Florence and decipher clues left in a copy of Dante’s Inferno.

The whole film is as ridiculous as it is dumb. Tom Hanks is just drifting along on auto-pilot at this point, and Felicity Jones looks a bit lost but does her best with a horribly written character. Fifty percent of the dialogue is exposition; it occasionally feels like screenwriter David Koepp just got out Wikipedia and copy-pasted half the article and  then made Tom Hanks try to sell it as dialogue. Then again, he’s trying to adapt a Dan Brown novel so it can’t have been easy because prose and the internal monologue seem to be alien concepts to Mr Brown.

The villains are ridiculous, the plot is ludicrous, and the film’s soundtrack hangs over nearly every scene which wouldn’t be a problem if the soundtrack wasn’t so inept. There are so many things that are wrong with Inferno and yet I’d be lying if I said I wasn’t entertained. It’s so bombastic and self-serious that it does have a certain B-movie charm. Plus some of the locations are nice to look at.

To use the old cop-out critic line: if you enjoyed the first two installments of Ron Howard’s Robert Langdon trilogy (AKA the ‘running through Europe explaining things’ trilogy) the odds are you’ll enjoy this one too. Inferno is by no stretch of the imagination a good film, but it does have the unique attribute of being so dumb and ridiculous it’s entertaining. If it’s a Friday night and you’re home with pizza and a six pack of beer this will provide some mindless fun. Plus it’s a lot cheaper than a trip to Italy.

Inferno is in cinemas from 13th October through Sony Pictures.

Written By
Simon Storey
More from Simon Storey
Australian cinema can now lay claim on having made its own version...
Read More