In the historical community there’s a joke that all of Russian history can be summed up in five words: ‘But then it got worse’. A country that went from serfdom to Tsarism to the slaughtering grounds of the First World War to revolution to civil war to Stalianist terror to the unimaginable bloodshed of the Second World War is clearly going to have a unique and stoic view of the world.

Alexander Sokurov is one such Russian who seems to have a grasp on history better than most, the way that it shifts and changes depending on who is telling the story. In 2002 he directed Russian Ark, one of the most unique films ever made. Often touted as a masterpiece, this tour through Russian history with a walk through St Petersburg’s Winter Palace is notable for being entirely shot in the first person and the entire 96 minutes being a single unbroken Steadicam shot, filmed without the aid of CGI or editing (it was a film in one shot before it was cool).

Sokurov’s encore to Russian Ark arrives in Francofonia and although the themes are similar, the setting is different. This is a tour through the Louvre and its history and is a meditation on the form of art. It’s all very European and while not always easy to understand, Sokurov has created a fascinating piece of work.

We begin with Alexander Sokurov himself sitting at his desk, his voiceover ruminating on the film he has just made which is also the one the audience has just started watching; it’s all very meta. From here he Skypes the captain of a container ship whose cargo is headed for a museum, which presumably would be the Louvre but it’s never specifically stated. The film fades in and out of a few different tangents like this and understanding what’s going on doesn’t seem to be the point. Like a lot of films made in the Soviet model you just sit back and let the images and montage carry you on a journey. 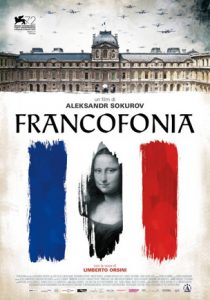 Francofonia is a bit like a cinematic poem. Unique and beautiful yet also difficult to understand, it’s only the arty folk who seem to be able to comprehend it and even then they might just be really good at pretending to understand it. There are sublime moments like when Napoleon is walking though the Egyptian section and you realise that the sculptures he’s talking about are 9000 years old, and there’s also moments which need a ponder over a post-film coffee to try and make sense of.

Going back to the point made about history, this isn’t just a museum tour but a meditation on art and its significance. One of the main sections is about the Louvre’s place in World War Two as Hitler visited it after conquering France. The Russian voiceover reminds us that it was so fortunate that Hitler liked French culture and art, because if he had felt the same way about France as he had about Russia the world would look very differently today. As a point of reference the film speaks of the Tragedy of Leningrad, in which the Germans laid siege to the Soviet capital for 900 consecutive days, creating a level of destruction and loss of life never before seen or since matched as nearly one and a half million people were starved to death. More Soviet citizens died in the Siege of Leningrad than the British and Americans lost for the whole of the Second World War combined. That’s over four times more than were killed at Hiroshima and Nagasaki. Imagine the treasures the world would have lost if this had happened to Paris.

Art is mankind’s great way of understanding itself, in the words of Roger Ebert: it’s the closest we can ever come to truly understanding what a stranger thinks and feels. Sokurov’s cinematic essay manages to be both a meditation on art and a work of art itself, which mustn’t have been an easy thing to think up or let alone film.

At one point the idea is posited that France and the Louvre are symbiotic. The Louvre is France personified and everything that the French consider themselves to be is contained in the Louvre. It’s a fascinating idea, one of the many that Francofonia makes you stop and think about. Although this will only be enjoyed by a select audience, this is still a chance to bask in the glory of European art and if you’ve ever made it to the Louvre in your travels a healthy dose of nostalgia is coming your way. For everyone else, it might be time to start saving for that trip to Europe you’ve always dreamed of.

Francofonia is in cinemas from 6th October through Madman Films.

Written By
Simon Storey
More from Simon Storey
After getting its premier at this year’s South by South-West, Honeymoon is...
Read More