The opening image of Julieta is a vast sea of red. A deep, breathing, powerful wall – it represents an opening curtain, a beating heart, and clearly signals that you’re in Pedro Almodóvar territory. Red is the Spanish master’s signature colour – it’s the colour of Spain, of passion, fire, blood and danger – and it lights his film once again.

Alongside this bright canvas of colours and style, other trademarks of the auteur take their place – a female centric story with exquisite performances, a twisting intermingling of past and present, high drama, mother/daughter relationships, unexpected death, terminal illness and, of course, sex. But Julieta is also about as mainstream as an Almodóvar film can be, the director doing away with much of the ‘melo’ of the dramas that he made his name with. It succeeds in many ways, but ultimately as a dramatic story, it regrettably fails to make the lasting emotional impact that would have made it one of the director’s best films. At times it’s a struggle to understand what story exactly he’s trying to tell, with much information withheld until the final act, not allowing enough time to truly invest in Julieta’s emotional state. However, it wouldn’t be a surprise if the film grows, richens and rewards with multiple viewings. 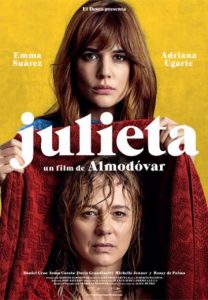 Relocating a selection of Alice Munro’s stories to Spain, the film tells the 30 year story of middle-aged Julieta (Emma Suárez), who’s planning to leave Madrid for Portugal with her boyfriend. A chance run-in with a childhood friend of her estranged daughter brings news that destroys the fragile scaffolding holding up her new life, sending her spinning back into obsession over the past. She abandons the plans, instead moving back into the apartment building that she once lived in with her daughter. She begins writing her an autobiographical letter, explaining to her daughter how she and her father came together and apart.

Almodóvar, the master of the flashback, takes the story back to the 80s and 90s, starting with the meeting between a young Julieta (Adriana Ugarte) and her future husband Xoan (Daniel Grao) on a winter’s night train ride, a scene that foreshadows the problems Julieta will later face in life. Almodóvar builds the film on this sequence of love and death, with nods to the work of Hitchcock and Patricia Highsmith (Strangers on a Train) – Alberto Iglesias’ score at points recalling that of 50s noir mysteries and thrillers. The mystery to be unravelled here is Julieta herself though – how she came to be so detached from the world and eventually her daughter. The story really is about the debilitating effects of grief, loneliness and depression, how it ages and transforms, and also how guilt can be transmitted, can seep out of you into others no matter how much you try to hold it in. The central performances of Suárez and Ugarte are critical to this, with Ugarte a particularly arresting and complex screen presence – Almodóvar could well have found his next muse to build his future films around.

This is a director incredibly fluent in the visual language of cinema. There is a transition between the two main actresses that is quite brilliant, while the style and colours – from young Julieta’s shock of blonde hair and bright lipstick, to the blues and reds of a wonderfully styled 80s train car – are ramped up and make the real world seem dull. The visual details and symbols are deep and feel like they warrant multiple viewings to tease them all out – the contrast in design of the living spaces, the images of the sea, a self-portrait of Lucian Freud, the amputated and neutered male sculptures. While not quite at the level of the luxuriantly sensual imagery of Broken Embraces or Volver – the kind that makes you want to freeze the frame to revel in it – there are few directors’ films who coat you like Almodóvar’s.

Julieta is in cinemas from 13th October through Transmission Films.