Going into a film called House of VHS (aka Ghost in the Machine) I knew it would have something to do with an area I’m very fond of: VHS and nostalgia. Even better, sounding like it could be a horror film, it ticked all the right boxes. Apparently I’m own my own here, the younger protagonists in this film had to be told that once upon a time before DVD and Blu Ray, there was a thing called VHS. Eventually these guys get to appreciate the format a little better, but by that stage interest levels had already departed.

I’m not sure what writer director Gautier Cazenave is trying to say here, but I do know that age shouldn’t be a an indication of characters’ ignorance. I will add, that regardless of obsoleteness, VHS is still strong amongst collectors and retains its importance in film history. This is definitely a missed opportunity that defines such a niche market and appreciation for the medium.

For a running time of 83 minutes,  one would think that House of VHS would waste no time in organising structure and logic to its narrative. But this is not to be the case.  The first half revolves around a group of six people heading to an abandoned French house. The point of this trip is to be without technology for a week, as if the idea is a concept piece from Marina Abramović. I am still unsure of why it had to be six people from different backgrounds, or how they even knew each other. Clearly they aren’t the best of friends. They fight, whinge, and are racist. The characters express the most stereotypical, overtly masculine stuff and so much bro culture it’s terrifying to witness. Usually in a horror film it helps to feel sorry for a protagonist. No chance here. 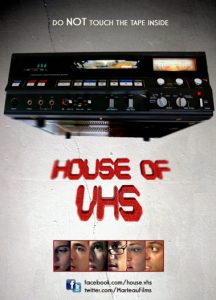 The next half delves into the horror side of things. The only likeable protagonist, the Australian one (Ewen Blumenstein) finds a stack of VHS tapes in the abandoned house. He shows the rest of the team, and subsequently explains the whole VHS movement when he discovers they are oblivious. From here things in the film don’t make a whole lot of sense. The VCR player starts to spawn its own narrative loops on screen and is meant to somehow be cursed. This is not explored enough, coming way too late in the narrative. Had it had been earlier with a clearer meta angle, then maybe it could have worked.

On the plus side, the audience gets to see a mash up of different sci-fi/horror and exploitation films, some real and some pretend, which eventuates in a bit of fun. At the same time, it goes for a little too long and seems like filler. Although there is an indication that Cazenave does have an interest in cult cinema.

Other issues with House of VHS include the camera work. Now I’m aware that this is a kickstarter film. I do applaud indie films and new filmmakers, but the camera work is overconfident. On a few occasions the editors have used split screens, which unfortunately look like the introduction to The Brady Bunch. Because this technique is used randomly, it is hard to take seriously and is distracting to the eyes. The same can be said about the soundtrack. A punk band called The Outbursts provide the score and one assumes that with its horror focus, that punk or metal music must be present. Maybe something like classical or ambient sounds could have been more interesting or unique to the format.

It’s a shame House of VHS uses the word VHS and does not creates something homage worthy. This one is like watching a film stuck in a backpackers’ hostel, hating life and chugging beer.

House of VHS is available on DVD and VOD from 21st September through Bounty Films.