The Iran-Iraq war started in September of 1980 and lasted eight years. An estimated one million people died in a war which saw Saddam Hussein drop chemical weapons on civilians and conduct air raids on Iranian cities during his policy of terror. This is the backdrop for Under the Shadow, the debut film of Iranian born writer/director Babak Anvari. Dripping with subtext and genuinely terrifying, this is a showcase for Iranian film at its best and it augurs incredibly well for Anvari’s career.

At the beginning of the war with the confusion and fear of air raid sirens still causing panic, Shideh (Narges Rashidi) is trying to keep both her family and sanity together. Before the revolution she wanted to be a doctor, but political awareness and the fact she’s a woman stop this from ever becoming a possibility. With her husband drafted and off to the front lines it’s her job to stay in Tehran and take care of her young daughter Dorsa (Avin Manshadi), who is just old enough to grasp how much danger they are in but not old enough to understand it.

It is when a missile hits their apartment block and doesn’t detonate that the malevolence begins. Warned by an older lady who lives in the apartment across the hall, the very literally minded Shideh starts to fear the presence of djinn – Middle Eastern spirits who travel on the wind and feed off fear and confusion. She soon suspects that one may have imprinted itself onto her daughter and in the middle of the war, its sinister games begin.

Under the Shadow is that rare breed of horror that is as thought provoking as it is terrifying. It’s the kind of experience that reinforces the unique potential of the horror genre, how it’s able to explore some themes better than any other kind of film. 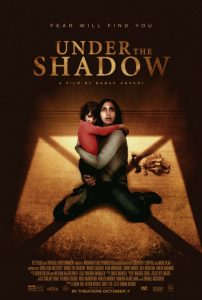 The best comparison is The Babadook, which is doubly applicable here because Under the Shadow manages to replicate both the basic synopsis (mother and child against a supernatural foe which may or may not be real) and the masterful build up/pay off. But while Babadook managed to be an incredibly intelligent film about grief and post-natal depression, Under the Shadow is about the way that Iran and Islam in general treat women.

Under the guise of Anvari’s conventional horror film there lies a furious critique of the way that women are treated in post-revolution Iran. Once you look back over the film with this in mind there are so many moments and little touches that act as metaphors for this important subject. This subtext is never overt and the film avoid obvious and clichéd symbolism, meaning that Anvari has created the best kind of film; one that will get deeper and more rewarding with every viewing.

Yet even with this talk of subtext and metaphor the basic question that lies at the base of every review of horror film is this: is it scary? The answer is of course yes. Under the Shadow  is ice-in-spine, shit-in-pants levels of terrifying. It’s rare that a film is able to be scary from the beginning to the final scene, and props must go to Anvari for the supreme level of restrain he shows in pacing. There’s nearly no scares for the first quarter while all the story and characters are being set up, yet the tension hangs over the film like a veil. Once the scares start coming thick and fast the film has worked enough to make sure they’re incredibly effective. Narges Rashidi’s dignified performance is yet another factor in this.

For better or for worse Iranian cinema changed dramatically after the 1979 Revolution. Ayatollah Khomeini is quoted as saying “Cinema is one of the manifestations of culture and it must be put to the service of man and education” , and even with this mindset the twisted and deformed government that now controls Iran has a strict policy of censorship over the arts.

Yet even with, or maybe because of, the strict censorship put on films, there have been some truly great works come from Iran’s film community, Jafar Panahi being the most notable. Iranian filmmakers are the masters of “saying things without appearing to have said them” and when films like Under the Shadow come along it’s easy to see where their stellar reputation comes from.

Under the Shadow screens exclusively at Cinema Nova from 6th October through Rialto Distribution.

Written By
Simon Storey
More from Simon Storey
When one of the finest actors of his generation leads in a...
Read More