Continuing the seemingly nonstop trend of remakes is Hollywood’s latest big budget adventure The Magnificent Seven. Antoine Fuqua’s brings a modern touch to the western classic which is in itself an English version of Akira Kurasawa’s classic Seven Samurai. While it lacks the same charisma and soul of those classics, as far as Hollywood rehashes go it’s not terrible. Carrying the weight of expectation is an appropriately magnificent cast including the likes of Denzel Washington, Chris Pratt, Ethan Hawke, Vincent D’Onofrio and Peter Sarsgaard.

The film starts on a strong note, of fire and desperation, after a terrible injustice committed upon a budding Western town. Peter Sarsgaard epitomizes malice and greed as the town’s tormentor Bartholomew Bogue. Owner of the local mining operation he has the sheriff under his payroll, and employs another two dozenish deputies to enforce his thuggish rule.  To expand his operation Bogue orders the peaceful inhabitants away from the township offering only a pittance in remuneration under the coercion of violence. Newly widowed Haley Bennet enlists the help of rogue state officer Denzel Washington in a fight for vengeance and righteousness. From then onward they convince another six bad ass rogues all with highly specialised fighting skills to their cause to take on the bullies controlling the town. 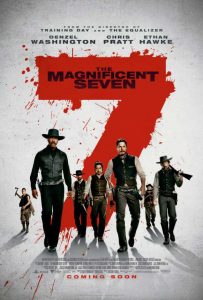 In terms of adventure and action the script belongs in the top echelons of cinematic story telling. The pacing does not echo that same excitement however. After an whirlwind beginning culminating with the seven’s first ride out together the film hits a brick wall and slows right down in anticipation of a final stand for justice.

With such an immense cast of talented individuals the film does not completely sink. Denzel Washington plays a great straight man to many moments of humor littered through the film. Chris Pratt once again cements his place as one of the top leading mans of Hollywood right now with his sublime blend of on screen brashness and humility. Even the lesser known members of the seven such as Byong-hun Lee and Martin Sensemeier steal plenty of scenes with their respective oriental and native American fighting prowess.

When the film finally does hit its crescendo it’s somewhat worth the wait. Within a prolonged dramatic finale the fighting borders on a much of the sameness. Good guys who all seem to kill with one shot at ease vs bad guys who can shoot dozens of rounds and only manage to hit extras. The saving grace is some extraordinary hero death scenes.  The Magnificent Seven may not live up to the classics that inspired its rebirth but it is an excuse for a magnificent cast to show off their prowess with echos of classic western genre tropes.

The Magnificent Seven is in Australian cinemas from 29 September through Sony.