It is not really fitting to be laughing at a boy with autism, but in Roger Ross Williams’s documentary Life, Animated, he provides the appropriate environment to do so. The reason you can laugh is that this documentary provides a levelheaded spirit throughout.

Williams has adapted the book, Life Animated: A Story of Sidekicks, Heroes and Autism, which was written by Owen’s father, Ron, an accomplished journalist. Life, Animated follows Owen and his family. Owen is a ’90s kid. From the age of three, Owen went missing, metaphorically. The boy that returned was one who couldn’t communicate. Struggling with normal cognitive practices and the ability to develop, with the lack of medical awareness of the time. It isn’t until a pivotal point in Owen’s growth that saw his love and connection to Disney films as a gateway for communication. The doco also spends time learning about the family and the emotions they faced. His father and mother, Cornelia are depicted as strong and caring, as is his brother Walter. As a person, Walter is my favorite, mainly because he looks and sounds a lot like Adam Driver. On a brotherly level he helps Owen out on topics too awkward to discuss with parents, like French kissing. 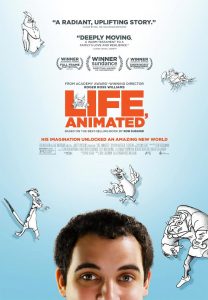 What is so enjoyable and respectful in Life, Animated is you really get a sense of Owen and his family. It is very natural, but it is also quite imaginative. A documentary that I use as my benchmark for feeding this emotion and artistic flair is Cobain: Montage of Heck. It creates the right headache for a fan on all things Kurt Cobain. It weaves Kurt’s journal and drawings and really reaches out as a documentary to give you that bit more. In the same way, Life, Animated enables a wider connection to a world belonging to Owen, his family and friends. You could say, just like your typical ‘tortured’ artist like Cobain, Owen is similarly one. However, the word tortured although in some sense yes, one shouldn’t assume this is the case. This is quite an uplifting journey. Life, Animated puts this into perspective. Autism is handled delicately and not sugar coated, as it shows the dark stages and learning difficulties. Which is still case for Owen. But then it’s equally inspirational. This is through Owen’s artistic and strongly wielded personality. Displayed through illustrations and musings, Owen’s ability to share and teach his love for Disney. To the point of being the curator and club president of the Disney club Owen runs on the side to his secondary schooling.

For a documentary that needs to grab your emotions like this, Life, Animated has the right amount of personality, which embodies you in a world and helps you empathise with the subject. But Life, Animated is really a win/win documentary. It gives a balance of the scientific and the artistic, the rational and the irrational. Plus, you do get to laugh at Owen’s vivid Disney impersonations and get a little bit jealous of his extensive Disney VHS collection.

It may make you sniffle but it is a comfortable way of understanding, something not readily comprehensible. It is refreshing, so expect to be inspired and that bit closer to understanding life with autism.

Life, Animated is in Australian cinemas from September 29 through Madman Films.