Equity, directed by Meera Menon, is a new corporate Wall Street drama that basically sums up the struggles women face in a man’s world. Breaking Bad’s Anna Gunn (Skyler White) and Orange is the New Black’s Alysia Reiner (Natalie Figueroa) front this piece, and like their TV personalities, they are powerful women, if not a bit money hungry. In Equity though, you are thrown in the deep end, never gaining control but noticing it as a disorderly waste.

Gunn plays Naomi, an investment banker who makes a move managing a social network. For Naomi, the new IPO called Cachet offers her the chance of going forward and making money. But of course there’s more. Maybe we can blame The Wolf of Wall Street for representing a stockbroker’s life as wild and hectic. Equity adds scandals, lies and relationship betrayals to come in and disrupt things.

Deriving tension through its use of composition, this score feels lazy. Arranged by Alexis Marsh and Samuel Jones this imposingly sentimental vibe is used at the start of the narrative and right throughout. It feels as though the score is trying to tell you how to feel. Which is irritating, as the music suggests tension, scandal and progress but never lets you feel these emotions of your own accord. 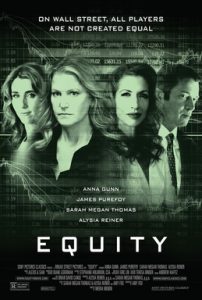 This is the sort of poor representation that comes across in Equity. For a film that has some interesting points to make, the minimalist and corporate mise-en-scène throughout the film’s journey downgrade Menon’s spark. Sure it may reflect this type of moneymaking lifestyle, but did lack its own personality. It may deliberately humorise a typical male dominated space where for a woman to succeed and play the part, they must live and breathe a certain way. However, I found my interest gelling towards Reiner’s character, Samantha who feminizes the narrative. Seemingly trivial but nonetheless interesting, Samantha is gay. Once this is highlighted in the narrative though, Samantha suddenly becomes girl crazy like an obnoxious male, even though she has a partner. However, the womanly attributes in the household she shares with her partner and kids makes it unique and domestic, and quite the opposite to her power hungry personality at work.

The idea of motherhood in the workplace is also raised with the younger, thirstier Erin (Sarah Megan Thomas), who is expecting. Erin’s home in contrast, is corporate and sterile. Worried this will jeopardize her career, Erin keeps her pregnancy a secret. Perhaps the use of colour in Samantha’s home symbolizes a content, in-control figure, compared to Erin and Naomi. In this way Samantha is more fluid, but it’s the other women who are masquerading their femininity in the workplace.

Acting-wise there is no problem, even though it looks like a Television movie, everyone plays their part to portray some cringe worthy people. It is within this narrative, interesting characters challenge these masculine spaces. They do come across as progressive, but at the same time sexist. It does leave me pondering the way women must act in a male dominated sphere.

Equity does have something to say and critique, yet would have been more appealing if production values were boosted and compositions were compressed.