For all intents and purposes Blair Witch is more a modern remake then a loose sequel. It’s been twenty years since Heather, Mike and Josh went missing in a Maryland forest. Now Heather’s brother James (James McCun) is returning to the same forest for some form of closure on what took place. The premise is a little weak but once the ball gets rolling the film doesn’t let its foot off the accelerator until a heart pounding finish.

In a case of Deja Voodoo a disclaimer before the film lets us know this is found footage and the persons involved are missing. James is aided in his search by childhood friend Peter (Brandon Scott) and his partner Ashley (Corbin Reid). Rounding out the gang is Lia (Callie Hernandez). She decides it will be a good idea to turn the gang’s escapades into the haunted woods into a documentary.

On the way through town the group are reluctantly joined on their expedition by local couple Lane and Talia. The idiosyncratic pair add tension and an unsettling dynamic to the group. When things get prickly after only one night a schism opens up with the group. The cynics are proven wrong as the entity within the woods begins to torment and hunt them. After a slow start not much is wasted within the films short and sweet 90 minute running time. 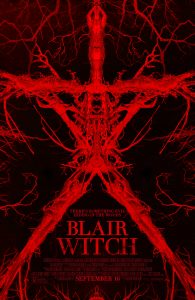 By and large the major difference between this film and the original lies within the verbs of the film. The mystery of the forest in the original was passive to the group, always out of sight. Subconscious fears within the viewer were aroused by what wasn’t shown. In Blair Witch the paranormal forces and the witch herself are much more corporeal and active. Depending on what kind of viewer you are this can heighten the fear or fall flat. A positive for the film is that unlike many other horror contemporaries, the character decisions check out after finished viewing. No ‘why are they doing that?’ or ho hum infuriation of watching brass young adults provoke the supernatural with inevitable results.

Annoyingly the film needlessly tries to imitate the found footage style of the original to a fault. While the first had a unique verisimilitude stemming from the infamous behind the scenes manipulation of amateur actors, this film finds  itself  trying too hard to imitate that authenticity. It’s an exasperating experience hearing the same ten to fifteen minute spiel every found footage feature seems to have now- explaining clearly and slowly why the film is going to be hand held and why there is going to be so many cameras angles It’s redundant, we get it already.  Once it’s revealed everyone will be wearing eye level cameras the result is quirkily similar to the one of a kind filming style used in the UK hit series Peep Show.

In many ways Blair Witch is an imperfect remake of a classic horror film. Whilst it lacks the verity and uneasy psychological undercurrent of the original, Blair Witch makes up for it with a multitude of heart thudding jump scares and exponentially building creepiness. If The Blair Witch Project was the dread under a placid lake, Blair Witch is the frothing dangerous rapids. In a way they complement each other, with the newest feature expanding on the fascinating mythos of the Blair Witch herself.

Written By
Ben Isbel
More from Ben Isbel
You know the feeling when you are really digging a song. There’s...
Read More