Roughly two years have passed since Laura Poitras released her documentary Citizen Four. That first-hand account of her meetings with NSA whistle-blower Edward Snowden – along with the subsequent involvement of journalist Glenn Greenwald and the Guardian’s Ewen MacAskill – was a uniquely thrilling experience. Ultimately because we really met him. But, while providing concise answers, it arguably raised more questions about the leak and the character of the man himself. Oliver Stone’s Snowden with Joseph Gordon-Levitt in the title role attempts to clear up some of the questions of character the last four years have raised.

For those unfamiliar with Edward Snowden’s legacy to date, he is a former IT specialist – or spy if you will – for the CIA and NSA, among other intelligence agencies and contractors. After a rapid rise through the ranks, he became disillusioned with the things he was witnessing on the inside and decided to smuggle a host of documents from the NSA database and distribute them to a select handful for gradual publication. He was in Hong Kong when the news broke and is now in exile in Russia, after he was stripped of citizenship by the US government.

Oliver Stone’s Snowden, co-written by Stone and Kieran Fitzgerald, tracks this remarkable story back to the roots of his intelligence and army service, to the first buds of his relationship with long-time girlfriend Lindsay Mills (Shailene Woodley), into his living room and all the way into his bedroom. One suspects, given the mystique that Snowden maintains around his personal life, it would a strange phenomenon for him to see his personal life so vividly fleshed out with characters played by Melissa Leo, Rhys Ifans and even Nicholas Cage.

One wonders how much is embellishment and how much came from the man himself. While it is filmed with a grounded restraint, the flair and Hollywood embroidery you’d expect from Stone is also evident. For instance, interviews with the man suggest he compiled files and information over a period of months – not in a ticking-clock scenario over a matter of minutes. That said, the character built around the celebrity in this biopic appears a logical expansion on the little we know – a skeptical patriot whose pivotal date was, like a lot of American service men and women, September 11. Though one could say it veers a little to the safe side in delving into his psyche.

It helps that the crux of the film is all but written for them by Poitras’s documentary, which is effectively and largely re-dramatised to make up the core of the subject matter. After all it is the most definitive portrait of Snowden we have to date. Gordon-Levitt plays the uptight and idealistic genius with a nice mix of eagerness and restraint, the careful murmuring voice completing a convincing portrayal. The supporting cast, by comparison, can be a little two-dimensional, the best of them being Woodley. 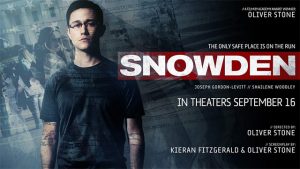 However, with such a short time frame having passed from the initial leak, this biopic can’t help but fall short of satisfying. For a more balanced retelling of the story whole, perhaps a few more years could have been left for the consequences to play out in real life. As it is at the point of filming, no resolution has been reached. Snowden’s revelations haven’t had legislative effect. He is still in limbo as a world citizen doing the talking circuit from his living room. And his legacy is still up for grabs from both sides of the conversation: traitor or Robin Hood of the information economy?

With little resolution other than a started conversation, a film like this is likely to fall on the side of advocacy rather than critique. And indeed it does. Spoiler alert, Snowden himself appears as himself at the very tail-end of the film to complete the delivery of what is becoming a very appealing doctrine concerning the institutional corruption of intelligence gathering practices. He is charismatic and all signs point to him being the genuine article. However, this cameo raises a number questions as to what purpose a film like this serves in the larger Snowden narrative.

If the filmmakers had such access to Snowden that they could get film studio clearance into his Moscow apartment, how big a say did Snowden have on the creative license of the narrative itself? Does this film function primarily as a thriller or is it campaign material? My impression is that this is a bridge-builder – campaigning a complex subject with renewed vigour to a new and perhaps previously indifferent audience, something that Citizen Four was limited in doing simply by virtue of it being a documentary and not getting the wide release and marketing.

As a film alone, it is a fine achievement, and is well worth seeing. It’s slick, well-paced, well-acted, informative and engaging. But regardless of how you perceive Snowden, these conversations cannot be conducted without asking at least a few questions of our narrators.

Snowden is in Australian cinemas from September 22 through Disney.

Written By
Angus Tonkin
More from Angus Tonkin
The premise of Jonathan Glazer’s film, Under the Skin, doesn’t sound like...
Read More