La Belle Saison is French for ‘summertime’, that time of year with the radiating sun and the slow lazy afternoons. It literally means ‘the beautiful season’. This is a very apt title for the latest feature from Catherine Corsini, a love story set over one summer in the 1970s amid the dawn of second wave feminism.

1971, Delphine (Izïa Higelin) is a young woman in the prime of her youth still working on her family’s farm. She grew up in rural France and this humble lifestyle with its traditional conservative views is all she has known. But she is growing up and wants to see the world has to offer, so she moves to Paris in search of independence and life lessons. It isn’t long before she finds the Parisian university halls filled with her sister feminists, imbibing the new anarchic spirit that the 1960s left in their wake.

This is where Delphine meets Carole (Cécile de France) a thirty-something woman passionate about this new emerging feminism who seems to be very sure of herself and her place in the world. The two soon realize their feelings for each other and in the Parisian summer their love blossoms. 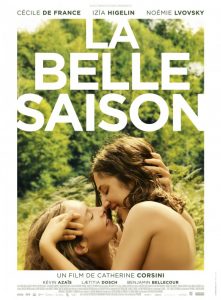 Corsini’s film, which she co-wrote with Laurette Polmanss, is a story we’ve all seen before but it overcomes the regularity to serve up a particularly delicate and stereotypically French love story. Through the warm haze of the European summer captured by cinematographer Jeanne Lapoirie, this tale of first love becomes all the more interesting because of the setting. Homosexuality coming into mainstream awareness was new and scary during the 1970s (although if you watch the news you’d think not a lot has changed) and for the ultra-conservative rural France the romance of two young women was both strange and morally reprehensible.

This setting and time has been impeccably realized with particularly credit due to the production design. Mid-century Europe has to be one of the most beautiful periods in history and Corsini has the luxury of bringing the canvases of both Paris and rural France to the screen. The way that the turbulent streets of Paris are used in conjunction with the quiet French countryside, giving weight to just how exotic these times were as social progress clashed against tradition.

The film’s attitude towards feminism is fascinating because while it clearly has support for these characters and the feminist campaign that was begun in the 1970s, it isn’t afraid to add an edge. In the beginning one of the ladies stands up and makes it clear that their cause is ‘not against men, but for women’ but then shows them getting into confrontations in the next scene with fervor. Another time we see Carole talking to Delphine’s mother and is clearly speaking down to her in that self-assured, self-aggrandizing way that those standing for a cause usually resort to. Corsini is clearly for these characters but all credit to her that these is a lot to debate and argue about when the film is over.

Performances are across the board excellent.  Cécile de France and Izïa Higelin have a comfortable chemistry with each other and de France in particular is fantastic. Being a French film it should come as no surprise that passion, sex and plenty of cigarettes are on hand to give these characters an authenticity that the French are so good at putting to screen.

Hitchcock once said that drama, as in the genre, is just like life with all the dull bits taken out. La Belle Saison is dramatic in the best sense with relatable characters taking on real life problems which happen to be occurring during one of the great transitional periods of the 20th century. Although not particularly original – If you think of ‘French lesbian drama set in the 1970s’ the picture in your mind isn’t too far off what the film is like, but it rises above the regularly seen story on the strength of the performances and the way it captures the warm throes of first love. First love hits like a speeding train and usually crashes like one too, but for Delphine and Carole their time together is summed up perfectly by the title: the beautiful season.

La Belle Saison is in Australian cinemas from September 15 through Palace Films.

Written By
Simon Storey
More from Simon Storey
Something everyone forgets about the Space Race is that the Soviets won...
Read More