Here’s one for you: what happens when you mix Wes Anderson, 1970s Australia, Napoleon Dynamite, coming-of-age drama and the Mighty Boosh? It’s impossible to know for sure but it’s a fair guess that the result might look a lot like Girl Asleep. The directorial debut of Rosemary Myers is a delightfully curious entry into the coming of age genre, adapted from the play of the same name by Matthew Whittet and shot beautifully by Australian cinematographer Andrew Commis. This darling of the festival circuit is one of the most delightful Australian films of the year.

Greta (Bethany Whitmore) is in a tough place. She is stuck in the lower rungs of the social hierarchy on the plane marked ‘loser’ having just changed schools, her best friend Elliot (Harrison Feldman) might have more than polite friendship on his mind, and to top it all off she is just about to turn fifteen and has to weather the strange and scary things that come with being a teenage girl.

If that wasn’t bad enough, her well-intentioned but hopeless parents decide to throw her a birthday party and invite every one of her new classmates. Unfortunately for the painfully introverted Greta this is the worst possible outcome, especially since a trio of mean girls from her school make it to the party and seem intent on making her life hell. Retreating to her bedroom she soon falls asleep and tumbles down the rabbit hole of her subconscious, discovering all the strange and creepy things that dwell in her dreams. 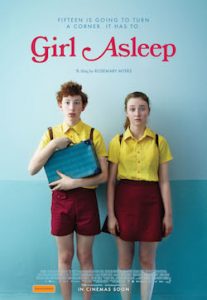 Girl Asleep has all the wacky charm and distinct artistic voice to make it a future classic in the low key arty community. At its best it feels just like golden era Wes Anderson with carefully constructed cinematography and a very quirky sense of humour. The level of care and detail that has gone into every single frame is clear. Every moment could be a picture in its own right and credit must go to the incredible work Andrew Commis and Rosemary Myers have done to ensure the distinct and beautiful look of the film.

Sixteen-year-old Bethany Whitmore makes for an amazing leading lady who carries the entire film. Previously having been the voice of eight-year-old Mary Daisy Dinkle in Mary and Max, this role proves that she has an incredible range which will hopefully lead her to bigger roles which, judging by her body of work, she totally deserves. The whole cast, including writer Matthew Whittet, has a role as Greta’s hapless father, seem to be having a great time, parading around in attire from 1970s Australia which looks utterly ridiculous to modern eyes.

Unfortunately, at about the half way mark Girl Asleep takes a very abrupt turn which it can’t quite overcome. The dream sequence is filled with strange creations, fabulously wacky costumes that look like the distant cousins of Mister Babadook, and deliciously dark set design, but this part of the film soon outstays its welcome. It’s easy to see why it’s there – the film is called ‘Girl Asleep’ so it makes a lot of sense that a dream would take up a lot of time – but this segment goes on for far too long and manages to kill the pacing, introducing a darkness which doesn’t really suit the rest of the film. It’s such a shame because every other part of the film apart from the dream sequence is delightful.

Despite not being able to iron over a few kinks, Girl Asleep still introduces a new and exciting voice into Australian cinema with this fabulously strange debut feature. The film has won numerous festival awards including the Adelaide Film Festival’s Most Popular Film and getting into the Grand Prix at the Seattle Film Festival so keep your eyes out for Rosemary Myers, Matthew Whittet and Bethany Whitmore. Now that we’ve seen what they can do, the sky’s the limit.

Girl Asleep is in cinemas 8th September through KOJO and Umbrella Entertainment.