“Most things aren’t black and white. The internet is neither good nor bad; it just depends on how you use it” say Ariel Schulman and Henry Joost, the team who made the 2010 documentary Catfish who have teamed up once again to bring us Nerve. Much like Catfish, which dealt with the underbelly of the internet, this techno-thriller for the Pokémon Go generation deals with a lot of the same themes but explores our obsession with internet popularity and voyeur culture with the idea of nerve.

Set in the not too distant future, Vee (Emma Roberts) is about to head off to college and leave her native Staten Island behind. She’s socially awkward and doesn’t take many risks and we know this because one of her friends states “Vee, you’re socially awkward and don’t make many risks”. Her friend Sydney (Emily Meade) introduces her to Nerve, a new app which is described as Truth or Dare but without the truth. You can be a ‘watcher’ or a ‘player’; players take on dares which are live streamed for their watchers. The more watchers you have the bigger the dares get and the more money you can make if you successfully complete the dare.

Vee signs up as a player to prove herself to her nay-saying friends and before long teams up with Ian (Dave Franco) who takes her into New York City. As the night goes on the dares they complete get more and more dangerous, something has to give and before long they both realise this simple app has ensnared them in a web of escalating danger. 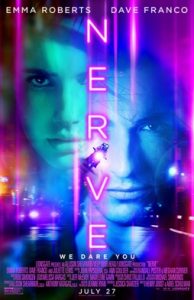 There’s the germ of an interesting idea here. The whole concept feels like it might have made an excellent short film but unfortunately it’s been stretched out in a self-important and monumentally stupid feature film. A topic like digital surveillance and the internet’s obsession with public humiliation are ripe with content so it’s disappointing to see them squandered in this neon drenched, simple minded film.

Emma Roberts has yet to break out into the realm of serious actress after not being able to shake off her roots as a Nickelodeon child actor. Her screen presence is usually good so it’s strange to see her fumbling around here in a role that seems miscast. Roberts is the last person you’d believe as being shy, awkward and yet to break out of her shell. Same too for Dave Franco, who is constantly parading around in simple minded mainstream Hollywood and hasn’t yet proved himself like his older brother.

There’s an inherent problem that comes with making films about the internet which Nerve will clearly run into. Considering just how fast the internet changes with updates and new systems being added every day, it’s simply too fluid for a film to make any major commentary about the here and now because by the time the film is out the internet landscape will have already changed. Skype and Facebook are prominent in the opening scenes, the problem being that Nerve is going to age itself dramatically within a period of six months. By the time the DVD will come out people will probably see it and think ‘Oh yeah, I remember when Facebook was laid out like that’.

Nerve almost goes down the route of being so stupid that it’s almost endearing for it. There are so many questions and gaps in logic which are laughable, such as: How do these characters get from one side of Manhattan to the other within 15 minutes? Why does no one’s phone run out of battery? Why are a 25 and 31 year old playing 18 year old characters? How do the police not know about Nerve (do they not have access to the app store)?  Why does the film depict hackers as a group of millennials wearing Hot Topic t-shirts in a den with neon lights? There are many kinds of bad films but this is thankfully the kind of bad which is also entertaining – pants on head levels of idiotic, yes, but still entertaining. It’s not boring and it’s not offensive which is more than can be said about a lot of bad films.

Nerve’s analysis of the current voyeur culture which the internet has birthed is cringingly summed up in the ridiculous final scenes when Vee shouts “It’s easy for you to be brave behind your screens!” So while the film is a waste of time the message is at least commendable and for the teenage audience the film is aimed at it’s probably going to give some cheap popcorn thrills. But unless Pokémon Go soon escalates into battle royale style fights to the death Nerve is going to be at the best forgotten and at worst dug up in the years to come and laughed at.

Nerve is in cinemas from 1st September through Roadshow Films.