Most of what runs through the veins of the Mel Gibson-starring Blood Father seems like another ‘Old White Guy’s Still Got It’ kind of movie, the kind that’s been popping up constantly ever since Liam Neeson’s cultural phenomenon of Taken eight years ago. We’ve had numerous actors that were big in the 80s and 90s front their own revenge flicks, from Sean Penn to Kevin Costner, and Gibson’s been in a few himself, including Edge of Darkness and Get the Gringo. But this film is different, first in that this old white guy actually does still have it. Secondly in that, in its own way, this film rejects those kind of films’ fetishism of guns and revenge, recognising the latter for the hollow void it is. Blood Father is about a man trying to get straight, to reject violence, and while the film is not exactly peaceful, the violence in it is brutal and unglamorous. It doesn’t really have a truly original cell in its film reel, but it’s still an enjoyable little on-the-run redemption action thriller.

As John Link, Gibson is an ex-alcoholic, ex-con, ex-biker living in a trailer park in the middle of nowhere, who just recently got out after a long stretch in prison. As he explains to the audience in the form of an AA meeting monologue, he’s trying to clean up after pushing away and losing so many people. One of those is his daughter, missing from her mother’s house for the last three years, and introduced to us in the opening scene. She’s caught up with the wrong people and ends up shooting her cartel boyfriend. She’s soon on the run from both the cops and cartel, and calls her dad for help. He tries to keep her safe and sober, and reconnect all at the same time. 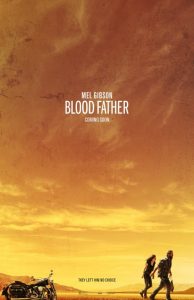 Gibson is suitably grizzled as a man who has repeatedly fucked up (the film smartly building on real world experiences), and he has affectingly haunted eyes. No matter your personal thoughts on the man, you can’t deny that he has and is an undeniable screen presence. All that made him such a star in the 80s is still there, just a lot rougher around the edges. He’s got more physical presence than even Neeson, carrying himself like a man that can and has been brutal, but doesn’t want to be anymore. He’s also still got that comedic lightness of touch, which comes through in some line readings and throwaway comments.

Erin Moriarty has trouble with the role of his daughter Lydia to begin with, struggling to effectively portray the fear and worry of the situation she’s got herself into. But she grows into the character and the role, doing her best work in the scenes that she shares with Gibson. The rest of the main cast are quality actors, with William H. Macy as Link’s sponsor and Diego Luna as Lydia’s boyfriend Jonah. Jean-François Richet has only directed seven films in his 20 year career, but they include the excellent Mesrine with Vincent Cassell. He brings some of that quality here, directing in simple but effective B-movie style, with good pacing, nice sparing use of close up, tight action sequences, and a few little visual flourishes.

It feels like Gibson has had a number of comebacks over the past two decades or so, but Blood Father is his best acting work since the start of the 2000s.

Blood Father is in cinemas from 1st September through Icon Film Distribution.

Written By
David Nagle
More from David Nagle
We asked last week whether Louie would finish the season on a...
Read More