October 1862. The second year of the bloodiest conflict in US history tears apart the fabric of the country as it feeds steadily more men into the mincing machine known as the American Civil War. In Jones County, Mississippi a battlefield medic named Newton Knight (Matthew McConaughey) deserts the Confederate army and goes home to his wife and farm, hoping to escape the bloodshed as his country slaughters itself.

As government troops forcefully begin seizing crops and livestock for the army, Knight’s disenfranchisement for the Confederacy deepens, leading him to take up arms against the new Southern government with a united group of runaway slaves and deserters. Their venture proves a success, going as far as capturing towns and settlements held by the South. They soon declare independence, announcing themselves as the ‘Free State of Jones’ in a move that is less counter revolutionary but more anti-­revolutionary. Although not supported by the Union they manage to hold out until the end of the war.

Directed by Gary Ross, whose major projects have been Pleasantville, Seabuiscuit and the first Hunger Games film, Free State of Jones aspires to be a historical epic but only manages half that description. No less than eleven historical consultants are listed in the credits and Ross has clearly done his research into Newton Knight’s fascinating story – this has been a passion project for Gary Ross for the past decade.

The McConaissance is still going strong. Newton Knight is in nearly every scene so the strength of the film largely rests on McConaughey’s shoulders. Through sunken eyes and shallow cheeks he turns Knight into an interesting leading man, which is commendable because the script doesn’t always give him a lot to work with. His relationship with former slave Rachel is a focal point of one of the film’s many subplots and incredibly Gugu Mbatha-Raw, who gained a reputation with 2013’s Belle, manages to make something of her thinly written character. This leads to the biggest problem that Free State of Jones can’t quite overcome; it’s beautifully crafted but emotionally hollow. None of the relationships are memorable or the least bit compelling. 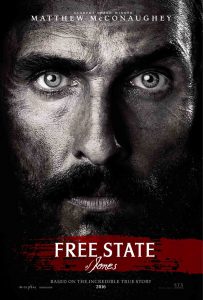 There’s rare attention given to the minutiae of this period. Instead of focusing on the blood and guts of the Civil War (although the opening scene depicting the Battle of Corinth is spectacular), or the grand themes of slavery, freedom and secession which have been explored many times elsewhere, Ross turns his gaze to the issues of race which lingered long into the period known as Reconstruction and even as far as the 1950s. As the years go by the film even slows down and carefully explains what happened, using period photographs and text to illustrate the point.

But while the history lesson succeeds totally, as a piece of filmmaking Free State of Jones is mixed. This is a tale which spans almost a century and deals with some of the biggest civic themes imaginable, so it’s disappointing to find that the film is let down by lackluster pacing and many different story beats and tones that don’t always link together. In its attempt to remain as faithful as possible to history the film doesn’t really follow a path as far as plot; it stoles along its 140 minute running time and then just ends without any real resolution.

At times the film is like a libertarian wet dream, as Knight and his militia fight against corrupt government in scenes that could be straight out of a Robin Hood adaptation. At other times it seems to champion McConaughey as a brother in arms in the fight for equality, a ‘White Knight’ to use the critical term which works doubly well in this circumstance.

Any film that deals with the Civil War and by osmosis race relations is going to be contentious with the current stew of tensions that linger in US culture, and here is no exception. In interviews Ross has repeatedly stated that he didn’t want to make another white savior film, but unfortunately that’s exactly what Free State of Jones has turned out to be.

But politics and pacing aside, this is still a worthwhile watch. The highlights by far are the costumes and cinematography. Production design by Philip Messina and Louise Frogley’s costumes help tell this story with the authenticity that it deserves, and having been captured by Benoît Delhomme’s superb cinematography is the cherry on top.

A few structural problems and occasional dullness stop this from being the epic tale of war, reconstruction and racial injustice that Ross has clearly tried to make. But Free State of Jones still stands on the quality of McConaughey’s performance, the incredible true story it tells, and the loving detail that has gone into recreating this particularly fascinating period of US history. What it lacks in story telling it makes up for in the quality of its history lesson, especially when considering the current climate of civics in the United States which seem to be getting less united every day.

Free State of Jones is in cinemas from 25th August 25th through StudioCanal.

Written By
Simon Storey
More from Simon Storey
With so much content coming out every year about the Second World...
Read More