Ben-Hur 2016: Or how I learnt to love Hollywood and stop inevitable comparisons.

The first thing that’s going to be said about this film is why re-make it. And that’s an entirely different question to should it be remade. But I digress. The movie is, well, it’s good. It’s not going to go down as one of the greatest films ever made and win 11 oscars. But it’s okay. Did it really need to be remade? It was worth a shot I guess.

Set in the early days of the New Testament in Jerusalem, Judah Ben Hur rides on a white horse (letting us know he’s going to be a good guy). He is racing Messala Severus, who rides a black horse (iffy). Even though they race with fierce intensity it’s apparent the two share an extremely tight bond because Morgan Freeman’s narration just told us so. You’re not going to not let Morgan Freeman narrate if you’ve got him on board. Just in case you’re not up to date with the classic films of the 1950s Hollywood era (looking at you generation Y) I’ll briefly go over the plot.

Messala is a Roman adopted into Ben Hur’s aristocratic Jewish family. The Romans are brutish thugs and occupiers of the peaceful, robust Jewish city. Messala ascends to high rank among the Romans and his  brotherly friendship with Ben Hur becomes strained; a metaphor for the uneasy simmering tension within the occupied city. An awful chain of events occurs when a youthful ‘zealot’ that Ben Hur is harboring attempts an assassination on a high statesmen Roman passing through the city. Ben Hur takes the blame and Messala, furious at his adopted brother, renounces their kinship and sentences his family to death whilst sending Ben Hur away as a slave within the Roman galleys. Ben Hur subsequently spends years of his life rowing Roman war ships thinking of nothing but vengeance against his former brother with every stroke. 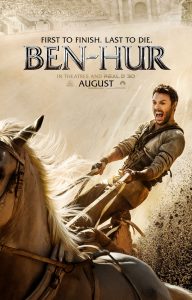 I’ve tried to skirt around it but the comparisons are unavoidable. I don’t begrudge the studio for attempting a remake of a classic*. It is frankly a better idea than rebooting the Spider-Man franchise three times in less than two decades. Bluntly, the film needed to hit a lot of criteria for this to pay off and it sadly doesn’t quite get there. Jack Huston really does do a very commendable job as the titular Ben Hur and is an exciting up and coming actor to watch. However he has biblical sized shoes to fill compared to late great Charlton Heston. Toby Kebbell as Messala broods through the movie with the emotional range of a petulant teenager. The character of Jesus has perhaps been mishandled. To portray a historical figure like that requires delicacy and poignancy. In contrast, director Timur Bekmambetov sticks to what he knows, as evidenced by his previous film Abraham Lincoln: Vampire Hunter, by relying heavily on high octane action and fast pacing. This is in contrast to the ’59 film which let scenes run as long as necessary until the human drama became palpable.

Even though the film severely lacks the drama, tragedy and scale of the ’59 classic, it does have going for it the typical Hollywood high stakes thrills. The film really isn’t terrible in its own right.  The sequence within the warring galley is close to, if not just as exhilarating as the other ’59 version, and the chariot race segment is equally as exciting as that in the ’59 version. That’s just as well considering it is the centrepiece of the movie. Quite possibly the biggest difference between the two films is the new ending which feels like it was polished through a dozen studio test audiences. Ben Hur’s revelation and ultimate salvation is no longer a focal point. What did come as a surprise in such a calculated blockbuster was the strong theme of forgiveness which was handled very well. All in all the film is well worth it for blockbuster fans. For those curious about the remake I encourage you to take in an open mind and you should find something of value.

*It’s worth noting that the 1959 classic was itself a remake of the 1925 film Ben Hur: A Tale of the Christ directed by Fred Niblo. So if you’d like to one up your hipster friend in your next conversation feel free to drop that little piece of trivia. Tell them you found the ‘59 version a Hollywood money grab (it was at the time) and that you prefer the great 20s film era of silent black and whites and watch slowly as the smug satisfaction disappears off their face.

Ben-Hur is in cinemas from 25th August through Paramount Pictures.

Written By
Ben Isbel
More from Ben Isbel
Spotlight is a film that creeps up on you. It's the kind...
Read More