It’s hard to pin down a definition for ‘black comedy’ but the best description would be that if you weren’t laughing you’d probably be crying. In the east Indian province of Sangrampur at the at the end of 2011, one hundred and forty three people died after drinking moonshine which had been made incorrectly. Cholai, the new film by director Arun Roy, is an Indian black comedy written around this terrible period and the Indian government’s later response.

‘Cholai’ is the Indian word for ‘Hooch’ or ‘Moonshine’, incredibly strong liquor which usually made in someone’s backyard and distributed around town by a small collection of private delivery boys. It’s cheap, readily available and highly addictive – a concoction which never works out well. This was the case in rural Bengal where three siblings (Partha Sarathi / Sandip Ghosh / Sumit Samaddar) accidentally mixed up a batch of cholai making it toxic. By the end of the day the deaths had started, and by the end of the week they realised that their illegal business had caused a death toll in the hundreds.

The government’s response was to give money to the families of the deceased, a rough estimate of $4000 for each victim. In scenes of greed, corruption and human error, people soon started trying to rort the system as cunning locals tried to benefit from tragedy. A scene that takes place in a mortuary shows a man being told that his relative had died, his response: “He’s dead? Good news!” 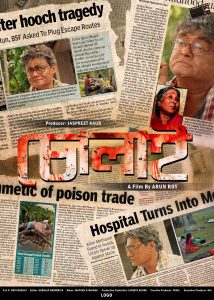 Playing at Melbourne’s Indian Film Festival, Cholai is a film with scenes that may make you cry and other scenes that may bring out titters of nervous laughter. There’s a very fine line between black comedy and being awkward over inappropriate subject matter; at times it’s difficult to see which side of the line Cholai sits on. The humour is a strange brand of poking fun at people and the characters acting like idiots. In its native India the film is getting fairly good feedback so perhaps it’s a brand of humor that only makes sense if you’ve grown up in Bengali culture.

For a country that proudly holds the title of ‘The World’s Largest Democracy’, Cholai seems to have a very low opinion of politicians. All those depicted here are incompetent, corrupt and sexually exploitative. The same goes for the media, who change their mind and hype up innocuous details with make it seem like the film’s goal was to satirise the media.

Technically the film is a little bit shaky, the voice dubbing is very obvious and at times it’s like the actors were employed to talk loudly over the film. Combined with the subtitles, which occasionally seem like the translation is off, means that a few scenes are quite awkward to sit through, especially if you’re not on the same wavelength as the humour. However, noticing these little technical deficiencies might be an observation that comes from the privileged position of Western audiences – After all, 95% of the films we watch all have technology and budget to fall back on which is a luxury that Bollywood doesn’t always have.

Cholai is a mixed bag. Making a black comedy isn’t an easy thing to do – Harold and Maude is one of the only films to walk the tight rope on balance – and the film makers here haven’t picked an easy topic; the 2011 Sangrampur methanol tragedy in which 150 lost their lives is no laughing matter. There are occasionally scenes which hint of a real talent, such as a slow motion montage of a community funeral pyre which was as unsettling as it was beautiful, but on the whole Cholai isn’t recommended. Members of the Indian community will probably get the subtleties woven into the language and the cultural references but writing as someone who isn’t able to get these insights this is a film as baffling as it is awkward.

Cholai screens as part of the Indian Film Festival of Melbourne from 11th to 21st of August.