No one will think it’s fake because how insane would this be?

There’s an excellent moment in Rodney Ashcer’s documentary Room 237 where the theory is posited that The Shining is actually Stanley Kubrick’s elaborate confession that the moon landing was faked. If that sounds like lunacy then you should hear some of the other theories that are put forward about The Shining in that strange yet amazing documentary.

Matt Johnson’s second film as director takes this theory and runs with it. Using a faux-documentary style which feels like a cross between the format of The Office and the period recreation of Mad Men this is the tall tale of Matt Johnson (playing himself… kind of) and Owen Williams (likewise), student filmmakers who in 1967 are hired by the CIA to infiltrate NASA to find a supposed Russian Spy. The plan soon changes and instead of tracking down one of those dirty spying Ruskies the team begin attempting something that conspiracy theories still believe is true; They fake the moon landing with the same tactics that Stanley Kubrick used to make 2001: A Space Odyssey.

Made by a team of filmmakers who have obviously done their research, Operation Avalanche (named after the code name of this hair brained scheme, which incidentally is the same name that the invasion of Italy in World War Two was called) is a very clever and surprisingly funny twist on the found footage genre, a format which passed its use-by date a few years ago. 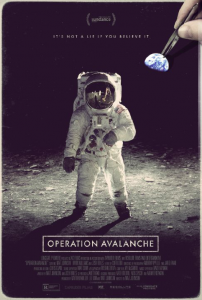 Stanley Kubrick is a clear influence on the project and he actually appears in person during a scene when Matt and Owen travel to Shepperton Studios in London to see how he filmed 2001. For the film and history fans there’s even a detailed explanation of how front screen projection works, which is such a clever trick it makes you appreciate just how forward thinking Kubrick was in his prime.

“Have you ever heard of the conspiracy theory before?” one character asks another; “Yeah, I think we’re in one” is the reply. The theory that the moon landing was faked has been around since the day Neil Armstrong jumped off the landing ladder of Apollo 11 on July 20 1969. To cut a long and arduous story short: we landed on the moon, it wasn’t faked. End of story. As much fun as conspiracy theories are, there comes a point when they’re well past their prime. This is one theory that has been disproved time and time again yet still hangs around and refuses to leave like a bad smell or a room-mate’s boyfriend.

As John Adams once said: ‘Facts are stubborn things’, and while the idea of a grand conspiracy to fake the moon landing, win the Cold War and fulfill John F. Kennedy’s promise to land a man on the moon by the end of the 1960s is a delicious piece of bubble-gum for the brain, it’s one that by now only contrarians and Alex Jones fans take seriously. However it has made for a great piece of subject matter for Johnson’s film which he has tackled in a unique way and executed it beautifully.

Even if it goes a little bit over the top in the third act, Operation Avalanche is a lot of fun which manages to breathe new life into the format of found-footage. Both history and film buffs will have a ball with this original and never dull twist on the historical documentary. Plus any film that might make you second guess yourself and briefly contemplate if Room 237 might have been right has accomplished something remarkable.

Written By
Simon Storey
More from Simon Storey
Over the years there have been umpteen adaptations of Gustave Flaubert’s classic...
Read More