I don’t know if any film has ever made me feel as uncomfortable as Sausage Party, but something tells me that’s the kind of stamp of approval Seth Rogen, Evan Goldberg, and Jonah Hill were looking for when they came up with this farce. Don’t be fooled by the cute animated aesthetic or the Alan Menken score; this is the last possible film you’d want to see with your family.

Everything you need to know about Greg Tiernan and Conrad Vernon’s Sausage Party can be found in the two-minute trailer, where we meet a sausage named Frank (Rogen), a bun named Brenda (Kristen Wiig), and a parade of foul-mouth food. Contrary to the playful interior of the supermarket, the “great beyond” of the real world is a savage world where predatory gods (humans) consume the food population; it sounds like the premise of an absurdist short film. Accordingly, the feature length version of the film fails to add much more to the plot, preferring to fill up the 89-minute duration with gratuitous profanities, low-hanging innuendos, and Rogen’s trademark stoner humour.

For the common punter, this film will probably shock more than it satisfies, however fans of Judd Apatow (who lends his daughter, but not his name, to this film) may well be divided. 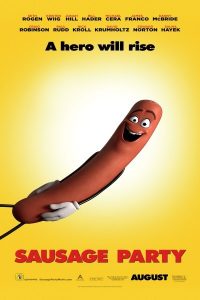 On one hand, it’s fun watching how Rogen and his rat pack get creative with this new medium. Having already tackled horror (This Is The End), crime action (Pineapple Express), and political satire (The Interview), they must have reckoned that Pixar-esque animation was the next frontier. It’s not hard to imagine him and his buddies, spliff in hand, brain-farting ideas on the couch: “Imagine if we made the villain an actual douche?”; “imagine if we turned a piece of chewed gum into Stephen Hawking?”; “imagine if we made a pita bread fight with a bagel?” Their jokes are predictably hit and miss, but maybe they deserve some kudos for feeling liberated (i.e. rich and famous) enough to convert their weirdest fantasies to the big screen.

On the other hand, creating an animated film about sex-crazed talking food was possibly a step too far. It’s not that the film is offensive; the problem is that it’s not funny enough. Like its title suggests, Sausage Party relies too much on tasteless humour for its gags and it falls into the trap of making sex and drugs its default punchline. This won’t necessarily surprise anybody, but the jokes start to wear thin very quickly unless you’re in a particularly childish mood.

Sausage Party peaks when it dabbles in satire. The messaging around religious dogma and tolerance is neither subtle nor profound, but at least gives the film another dimension. The Israel-Palestine dispute between Lavash (David Krumholtz) and a Woody Allen-inspired Sammy (Edward Norton) also generates some good laughs, even if it callously oversimplifies the issue. These scenes are Rogen and co. at their best, using the opportunities of the medium and constraints of the plot to generate a few moments of clever comedy. Unfortunately the rest of the film is too absurd and crass for any audience member to give these doses of political commentary any weight, while the accompanying storyline is flaky at best.

Sausage Party is in cinemas from 11th August through Sony Pictures.

Written By
Kevin Hawkins
More from Kevin Hawkins
From the comfort of Australia it’s easy to roll our eyes about...
Read More