The third instalment of J.J. Abrams’ newly rebooted Star Trek series is Star Trek Beyond. This time, however, he passes the directorial torch to Justin Lin, well known for his Fast & Furious work. While keeping the same tone as the highly commendable first two films, Lin injects a decent chunk of high stakes adrenaline into this space drama.

Picking up with branching narrative musings, Captain Kirk (Chris Pine) is getting bored in outer space. He is no longer the brass arrogant upstart eager to prove himself, but now a more mature and cocksure captain. Well into a five year space mission a listless energy and routine has fallen over the Enterprise’s crew, and the pacing of the film reflects that with long takes. Returning to a star base for respite from their shared monotony can’t come soon enough. Once at star base a refugee alien soon appears asking for assistance in rescuing her crew marooned deep within a dangerous asteroid field. Keen for adventure, Kirk volunteers. Making up for its slow start the film picks up from here and it doesn’t let go until the final moments. 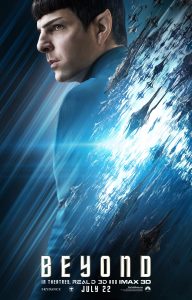 The film is co-written by Simon Pegg. His well known love of the franchise leaks through the script into the characters, who are the centrepiece of a film that, all things considered, doesn’t have a whole heap going for it. The action sequences are nothing new or exciting within the cinematic encyclopedia. At times the camera is too close to the action and the cuts too short to really gather what is happening. The plot consists of a thoroughly unrecognisable Idris Elba as the evil Krall hell bent on destruction for anarchy’s sake, and is thoroughly recycled. The motivations and coincidences of the story fall apart like wet paper under deconstruction.

It’s not all doom for the film though; Pegg’s idiosyncratic humour pours from the script in moments both expected and not. Spock (Zachary Quinto) and Bones (Karl Urban) have a great back and forth. Scotty (Played by Pegg himself) is both endearing and awkward around newcomer and total bad ass Jaylah (Sophia Boutella). The worrying Chekov (the sadly recently deceased Anton Yelchin) paired up with Chris Pine in search of crew mates is reminiscent of Pooh and Piglet. It is the relationships and cultural bridges that ultimately redeem the film. I can’t proclaim to be a Star Trek nerd myself, having only watched the latest films, but the characters are enthralling and it’s not hard for even a newcomer to become enamored with them.

The breakneck action of Lin and the revealing character duologues from Pegg combine into an enjoyable but perhaps not memorable experience. Excluding an epic space battle sequence set to the Beastie Boys’ ‘Sabotage’, many of the action sequences are rehashed. Ray Charles would be a better shot than many of the baddies when it comes to crunch time, and Krall seems hell bent on being a reptilian Dr Evil, taking Uhura (Zoe Saldana) up to his tower for the sole purpose of revealing his master plan. Ultimately it is the characters and their relationships at the crux of the film that make the film worthwhile. This is sure to be a huge hit with Trekkies, but that will remain to be seen with general audiences.

Star Trek Beyond is in cinemas from 21st July through Paramount Pictures.