It’s a simple concept. A creature that inhabits the shadows and cannot visibly exist in the light. It breeds a certain kind of paranoia, a sleep-deprived panic. Each shot takes on a heavy tenebrism; lightbulbs do not flood the room with light but rather fight through the darkness, flickering on the edge of blowing. Given that similar premises have been exhausted over the years in horror circles, it shouldn’t work as well as it does. And yet Lights Out directed by David F. Sandberg and produced by James Wan is a surprisingly assured pleasure.

Martin (Gabriel Bateman) is the kid who can’t sleep. In his bedroom he hears sounds. He likes the lights on. There is something terrorising his mother Sophie (Maria Bello) and it is the same reason she likes the lights off and he likes the lights on. Martin suspects this is why his sister-in-law Rebecca (Teresa Palmer) ran away at the first opportunity, and he doesn’t blame her. So when he calls on Rebecca for help, it brings back vivid memories of a time for her. It also raises the question: who or what is Diana and what does she want? 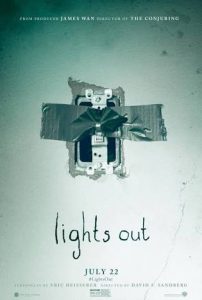 For a film that relies primarily on a repeat jump scare and a darkened pallet to keep the tension ever-present, this is brilliantly executed fare. The cracking pace of Lights Out has the running time coming in at 81 minutes, but instead of exhausting that allocation with jolts at the expense of storytelling, thankfully a gentle touch for humour and some strong performances, particularly from Gabriel Bateman as a petrified kid and the more resolute Palmer as his resourceful older sister, raise this above your average B-horror.

Expanding upon a short film by Sandberg, screenwriter Eric Heisserer shows a neat eye for building tension and leaves enough light to fill in the small batch of characters, establish their relationships and earn our sympathy before plunging them into darkness and danger. Having someone of the calibre of Maria Bello in the role of Sophie, a role that binds the plot together and which could easily descend into cliche in the wrong hands, also helps to ground the story. This tightly plotted build-up of lasting guilt and mental illness ultimately lends the thrilling climax an edge over similar contributions to the genre.

Using a familiar set-up, Sandberg teasingly assembles the landscape and mood from the outset, nodding knowingly to the audience on more than a few occasions. The flickering lights may border on comical, the lights may seem illogically weak, and a creaking door is never just betraying a lack of oiled hinges. But then part of the success of this film is its aim not to disturb or to disgust, but to entertain. And it certainly does that. Just not before it’s had you jumping for the light switch.

Lights Out is in cinemas from 21st July through Roadshow Films.