We Are Twisted Fucking Sister! is a two hour and fifteen minutes extravaganza that is written, directed and produced by Andrew Horn. For anyone who doesn’t know, Twisted Sister were an American glam rock band from the early 70s to late 80s. ‘Sister’ as fans often refer to them as, didn’t like the glam label and felt they fitted into hard rock, nevertheless they became famous for their two major hits ‘We’re Not Gonna Take It’ and ‘I Wanna Rock’, splitting shortly after.

Horn’s documentary is for their fans or at least someone who knows the era to find any significance. This is not a bratty response, but generally speaking music biopics can leave you in the lurch if you don’t know the band or if the director doesn’t fill in the gaps. Even the beautiful and intimate Cobain:Montage of Heck is really a waste of material if you don’t know Kurt Cobain as the singer of Nirvana or cultural pioneer of the 90s. It can be hard as a viewer to find some happy ground and give the subjects the recognition they might deserve.

We Are Twisted F***ing Sister doesn’t quite articulate the cultural significance part of why we should take notice of Sister. However, Horn does utilise intelligence and honesty through the eloquent band members. One is the founder, playing rhythm, lead guitars and backing vocals, Jay Jay French. The other is Dee Snider the main singer and someone who looks a lot like a clown-esque Cinderella. 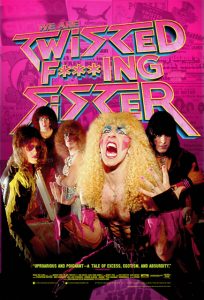 French and Snider encouraged rock ‘n’ roll clichés but their private lives tell a different story; they are straightedge businessman in spandex, yet quite opposing people. Horn emphasises these split personalities through editing. French feels it’s his right as the founder of the band to make all executive decisions, while Snider’s ego controlled him and Sister. French and Snider finish each other’s sentences, usually saying the reverse of what you’d expect. Their differences are also carried out through backgrounds. Whenever French talks, he is  presented behind the same background: Marshall sound equipment. He is depicted as the serious musician. Meanwhile the makeup heavy Snider has a black backdrop that compliments his rock star sunglasses and bleached locks.

Not to highlight tensions as such, but in a similar vein the later drummer A.J. Pero is presented as the macho bikie. Looking like a scene from Sons of Anarchy, Pero is always by his wheels with a bandanna fold. It is through these arrangements that this doco becomes conscious in presenting something that’s just not there.

As a documentary, We Are Twisted Fucking Sister is too material heavy. Fans may appreciate the collection of clippings, archival footages, anecdotes, key musicians and an impersonation of Motorhead’s Lemme. But if you’re not a fan, then it falls into dreariness and even becomes a little whiny. It makes it hard to feel sorry for Sister as the underdogs of the rock scene. Like a metaphor for their unsuccessful attempts of gaining a record deal, We Are Twisted Fucking Sister! never grabs your attention. When you get to the end, and learn the catchy ‘We’re Not Gonna Take It’ is not used as a cheeky reminder of the band’s frustrations and determination not to conform to the rest of the musical community, it makes it more dissapointing to not have this familiarity on this long-winded journey.