It’s crazy to think there was a time when Alfred Hitchcock was perceived to be more of an entertainer than an artist. It’s even crazier to think such perceptions of Hitchcock were present at what was arguably the peak of his career, following the release of classics Vertigo, Psycho, and North By Northwest.

The year was 1962, and French director François Truffaut had got in touch with Hitchcock for a week-long interview at Universal Studios. Truffaut’s subsequent book, Le Cinéma selon Alfred Hitchcock, was a frame-by-frame analysis of the English director’s best scenes, complemented with conversations between the two directors.

Kent Jones’ Hitchcock/Truffaut isn’t so much a re-creation of Truffaut’s apologetical text, as it is a reminder that Hitchcock is still – more than half a century on – the king of filmmaking. And although the book is the plot that ties the film together, Hitchcock’s plots (as one director notes) are merely the thread that holds things together, rather than the source of his talents. 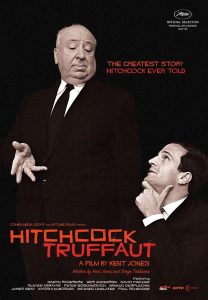 The joy of this documentary is not found in the interviews between Hitchcock and Truffaut, nor in screenshots of the book’s most noteworthy passages. In fact, sometimes these scenes feel a bit laborious, due to the ever-present English-French translations, and the filmmakers’ gushing devotion for the text. Rather, it’s the talking heads of directors as diverse as Martin Scorsese, Wes Anderson, and Kiyoshi Kurosawa that make Hitchcock/Truffaut a must-see for not just Hitchcock buffs, but all film lovers. Listening to them analyse Hitchcock’s works, often scene by scene, is a cinephile’s fantasy and a glowing re-endorsement that Hitchcock is still as relevant today as he was fifty years ago.

The film’s other strength is the permission it has to borrow generous sized clips from Hitchcock’s filmography. Even if you’ve seen them already, Hitchcock/Truffaut will inspire you to raid indie video stores and search op shops to find copies of Hitchcock’s back catalogue. The Wrong Man, Vertigo, and Psycho in particular are given great attention and are analysed in detail. Gaining a new perspective on these works is a treat, but there’s something extra special about watching these treasures on a big screen as Hitchcock would have intended. The upcoming Alfred Hitchcock Film Festival, which will feature his Hollywood works presented in digital, is similarly a valuable opportunity to appreciate Hitchcock’s genius cinematography.

While Hitchcock’s early silent films may be harder to find (only diehard Hitchcock aficionados will own copies), Hitchcock/Truffaut ensures these contributions aren’t forgotten. The documentary celebrates these early films as Hitchcock’s competitive advantage; learning to create suspense without sound was what made Hitchcock such a revolutionary cinematographer.

Despite its many glowing endorsements, the film also portrays Hitchcock as a control freak, citing his stern direction of Montgomery Clift (I Confess) as a case study. Jones leaves the verdict up to his audience, letting them assess whether Hitchcock’s obsession with fine-tuning every frame was a hindrance or the source of his greatness. Beyond this, the film is un-Hitchcock-like in its lack of conflict and its unrestrained praise of its protagonist.

For budding filmmakers, Hitchcock/Truffaut is essential viewing, if only for the how-to-guide in framing shots, building suspense, and messing with the audience. For everybody else, this is a feature that will change the way you look at Hitchcock, if not the way you look at filmmaking in general.

Hitchcock/Truffaut is screening exclusively at Cinema Nova from 21st July.

Written By
Kevin Hawkins
More from Kevin Hawkins
Who would have thought that the year’s most political film would be...
Read More