Whether you enjoy the latest Kendrick/Efron vehicle will depend on your propensity to take offence to crass humour. But while it’s wrong on so many levels, it’s actually oh so right if you can stomach it.

Brothers Mike (Adam Devine) and Dave (Zac Efron) manage to ruin every major event they attend, with their family blaming their stag status. As the wedding of their little sister Jeanie (Sugar Lyn Beard) approaches, the family demand that they find some nice girls to bring along. Enter Alice (Anna Kendrick) and Tatiana (Aubrey Plaza), two bong-smoking gal pals who can’t remember the last time they showered. When they hear about an ad for wedding dates that has gone viral, they don their best nice girl ruse in an effort to win a free trip to Hawaii. Hilarity ensues. For real.

Plaza and Kendrick’s introduction made this reviewer wary of what was to come. Aubrey Plaza shouting her bad-ass lines seemed like she was going to become pretty unbearable pretty quickly, while Anna Kendrick lighting up a bong was hard to buy because she IS the nicest of the nice girls. However, after a sluggish awkward start, Mike and Dave Need Wedding Dates became a surprise ripper. 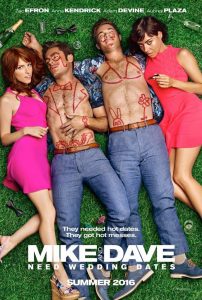 The comedy will no doubt be divisive, and a quick view of the film’s red band trailer should give you an idea of whether you are likely to be offended by the lewd jokes on offer. But in a refreshing twist, while the humour is crass, it isn’t actually offensive to anyone in particular. The jokes aren’t at the expense of women, nor of any minority. In fact, it’s probably one of the least sexist comedies of its ilk to have graced our screens. A massage scene with a happy ending comes incredibly close to crossing the line, but ends up being strangely liberating, not to mention hilarious.

Anna Kendrick and Zac Efron are the biggest names amongst the cast, and they’re both as charming as ever, but Adam Devine steals the show hands down. His facial expressions, lightning fast delivery and high-pitched screams consistently had the audience in stitches, and he is cementing his status as one of the most entertaining young actors today. By contrast, Aubrey Plaza is perhaps the hardest to warm to, although that’s probably because her character is lacking in very many redeeming features.

Outside the big four, Sugar Lyn Beard’s Jeanie initially seems to be a nothing support role with an annoying voice, but ends up being one of the highlights of the film as Jeanie lets her inhibitions go. In smaller roles, Stephen Root and Stephanie Faracy as the parents, Sam Richardson as Jeanie’s fiancé Eric, Alice Wetterlund as Cousin Terry, Lavell Crawford as the wedding emcee, Mary Holland as maidzilla of honour Becky, and Kumail Nanjiani as the masseuse, Keanu, all provide further laughs.

While Jake Szymanski has forty-five directing credits to his name, Mike and Dave Need Wedding Dates appears to be his first theatrical release. It’s by no means perfect but he does a fine job getting the best out of his cast. It’s unclear how much of the dialogue is improvised, but screenwriters Andrew Jay Cohen and Brendan O’Brien (of Bad Neighbours fame) seem to have written a fair few golden nuggets of dialogue. It’s – surprise surprise – not a particularly smart film, and some may consider it to be in bad taste, but to be honest I can’t remember the last time I laughed so hard at the cinema.

Mike and Dave Need Wedding Dates is in cinemas from 7th July through 20th Century Fox.

Written By
Claire Robson
More from Claire Robson
Picking up eighteen months after the events of the last season, the...
Read More