Maggie’s Plan has an extremely strong pedigree. Writer/Director Rebecca Lee still has some strong indie cred from last decade’s The Ballad of Jack and Rose and Personal Velocity; it stars Ethan Hawke, the mainstay of American independent cinema for twenty five years; Greta Gerwig, the hippest actress currently working in the business; Julianne Moore, fresh from an Oscar winning turn in Still Alice, not to mention Maya Rudolph (Bridesmaids), Travis Fimmel (Warcraft) and Bill Hader (Trainwreck) in supporting roles. With a cast like that and an interesting filmmaker, the film should be a home run. Unfortunately though, it is a derivative, offensively stupid film, tailor made for cynical hipsters who want to make fun of traditional romantic comedies while having their heart warmed and their funny bone tickled.

The story involves the titular Maggie. In her mid-twenties and wanting children but not having yet met her Prince Charming, she organises a former high school friend, Guy (Fimmel), to provide her with the necessary material to impregnate herself. Just as she’s going ahead with it, she meets John (Hawke), a teacher and aspiring fiction author who is married to the more successful Georgette (Moore). Maggie and John fall in love and the film cuts to a short time later when they are now married with a child and Maggie, now having second thoughts on John, concocts a plan to get him back with his ex. Yeah, right. 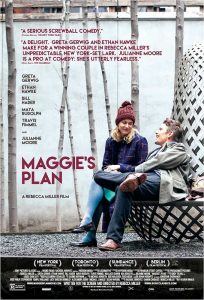 The first half of the film, the relatively traditional romantic comedy half, is a pleasant enough, if hardly essential, trek through the usual clichés with some delightful performances, as you would expect. Gerwig is a gorgeous and instantly attractive screen presence who provides the film with any shred of honesty it has in its later half. Hawke does his usual middle-aged man going through a mid-life crisis routine that he’s pretty much perfected since Before Sunset, and Julianne Moore generates a good many laughs with her larger than life Russian accent. Maya, Fimmel and Hader are also good in their smaller parts; Hader particularly coming into his own in these kind of roles.

Where the film goes wrong is in its second half. There was a time when Hollywood specialised in screwball comedies: films which thrived on absurd premises and the types of zany characters who could only find themselves at their centre. The difference between this and those films, is that even with their absurd premises, they didn’t hang their success on an idea as ridiculous as a second wife trying to get their husband back together with the first. It’s nonsense; offensive in its lack of believability to its audience, and it absolutely drowns this movie.

Despite the nonsense second act, Maggie’s Plan isn’t entirely a write off, but without the charm of its actors, there wouldn’t be much to recommend in it at all.

Maggie’s Plan is in cinemas from 30th June through Sony Pictures.

Written By
Chris Smith
More from Chris Smith
“I didn’t expect you to understand… You’re not Japanese”. When Mariko (Tao...
Read More