Beginning with the title, Land of Mine is not a particularly subtle film, but it is layered, tense and moving, and there’s much pleasure in a simple story well told, in a film simply well made.

There are endless stories to be told about WWII, endless lives affected and changed beyond comprehension. Land of Mine follows a group of young German prisoners of war sent to the west coast of Denmark after their country’s surrender. There they’re ordered to disarm and remove by hand tens of thousands (of millions) of landmines that litter the beaches. Overseeing the work is Danish sergeant Carl Rasmussen (Roland Møller), furious about what the Nazis have done to his country during occupation, not least the literal scarring of it with mines. Møller is excellent as Carl who becomes increasingly conflicted, battling the growing disconnect between his hatred and disregard for the Germans and his developing relationship with the boys, in particular Sebastian (the very good Louis Hofmann). 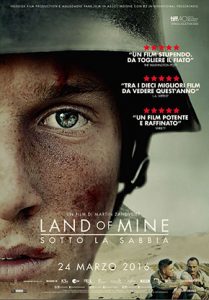 The film touches on the idea of how youth end up paying for the mistakes of their elders. These are boys who were forced to fight and now, while pressed into dangerous service once again, all they can do is dream of what they’ll do when they get home – have a beer, see a girl, or even start their own company to help rebuild the country. It feels like something we’re seeing in the world right now – that the children will end up cleaning up the adults’ mess.

It’s also about the idea of finding humanity again in the world after such brutality, after being conditioned to see the enemy as one thing, to instead see the connections between you. It’s the senselessness of war in microcosm and magnified. The human cost might get lost in the noise and confusion of the big battles of other war films, but it’s clear here when a beautiful quiet beach is rocked with an unexpected explosion. That startling, any second type of tension that the boys endure is expertly transmitted through to the audience by director Martin Zandvliet. He also makes nice use of the limited locations, with weather and light on the beach reflecting moods. He uses the ‘magic hour’ particularly well. When the orange stretches across the sand it signifies when the Germans can stop their work, be safe, be boys again for a little while. It’s also when Carl can stop being so much of a sergeant and guard. The special quality of the light almost illuminates them, their souls, highlighting who they are, their humanity to one another.

While sad and heartbreaking in parts, in the world we live in today, Land of Mine is an important reminder that the connections between us are much bigger than the countries that divide us.

Land of Mine is screening as part of the Scandinavian Film Festival from 6th to 27th July 2016 at Palace Cinemas.

UPDATE: Land of Mine is in cinemas from 30th March 2017 through Palace Films.