Spielberg is a virtuoso of inclusive ‘big’ cinema. His broad demographic appeal spans all ages. While adult stories have been his focus of late, this latest feature harkens back to his earlier adolescent and family focused film. The adaptation comes from the wonderful mind of the recently deceased Melissa Mathison who also wrote ET.  Unsurprisingly the tone of the film is quite similar to that of ET. A third genius is of course in the mix – Roald Dahl. His stories are so adept at contextualising an adult world through a child’s lens. Speilberg manages to capture the same wonder, magic and the dash of dread evident in all of Dahl’s works but perhaps found most prominently in The BFG.

The story is familiar to most.  Young orphan Sophie (Ruby Barnhill) is kidnapped in the dead of night from her orphanage by a giant. While intimidating at first, the giant is, no surprise, big and friendly. He claims altruistic intentions but it soon becomes obvious the giant has a desire for companionship. He and Sophie are kindred spirits. Both alienated lonely soles and both tender hearted and magnanimous creatures. Their fairy tale friendship soon runs aground. The BFG lives amongst nine other terrible, cannibalistic giants who hunt humans at sun down.  In contrast the BFG’s job is capturing and delivering dreams with a bubble blower-like instrument. I love that it’s his job. The combination of arbitrary and importance ring so true to how a child sees the world. 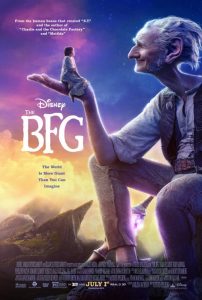 Ruby Barnhill as orphan Sophie is precision casting. She gives an impressive performance, full of subtle emotions. It’s a powerhouse performance from someone of her young age. Mark Rylance, who was so impressive as the protagonist in Spielberg’s last feature – Bridge of Spies brings life to the BFG through CGI. His giant blends seamlessly and warmly onto the screen. It is a remarkable display of the latest advancements to motion capture technology.

On a purely visual level the film is sublime. Cinematographer and long time collaborator for Spielberg, Janusz Kaminski deserves immense praise for his role in creating such beautiful settings. The narrative moves slowly through the first half of the film and it appears that this is to allow the visual spectacle the right space to be appreciated. The camera illuminates shadows and silhouettes. It plays with scale and size. Light is never wasted in the film to create a magical atmosphere. Part way through the film the BFG takes Sophie to the place he catches dreams. It is an ethereal and moving experience, filled with tangible dreams that streak across the screen with iridescent glows amidst an aurora backdrop. Like most environments in the film it is a textured and rich environment.

The BFG isn’t Spielberg’s best work but it’s certainly not his worst either. It would have been prudent to make more use of nine giants that cohabit the BFG’s world. Initially they are scary, loathsome beasts, but that terror is quickly dulled by their comically outlandish behavior. The giants are also indiscernible to their voice actors, which is a shame considering the talent behind the voices such as Bill Hader and Jermaine Clement. Without fearsome giants the story unravels somewhat, and the threat to the BFG and Sophie’s relationship isn’t as pronounced as it could be. The story wraps up a bit too neatly and quickly for any adults viewing this one, though it should hit all the right chords for children. The highly artistic camera work is the cherry on top for families and lovers of Dahl’s magical literary anthology.

The BFG is in cinemas from 30th June through Disney.