“Saving the world takes a little Hart and a big Johnson” says the tagline of Central Intelligence, the new film by Rawson Marshall Thurber who has previously given the world such mediocrity as We’re the Millers and Dodgeball. While this cheeky and undeniably clever poster quote is one of the great marketing slogans of the year, it speaks volumes that the only inventive or funny thing about this film is the tagline.

In 1996 Robbie Whierdicht (pronounced ‘weird-dick’) is the resident weird kid at high school with no friends, being both crushingly shy and about 100 kilos overweight. The opening shot is of him in the showers dancing and miming along to early-90s pop rock, because HA HA LOL FAT PEOPLE… AM I RIGHT? At the same time Calvin Joyner (Kevin Hart) is the most popular guy in school who, only weeks before graduation, is receiving an award. While he’s giving the acceptance speech a group of sneering bullies take Robbie from the showers and proceed to throw him on the gym floor so that the whole school can see him naked, peals of laughter follow and as the mortified Robbie stands there Calvin is the only one to go up and help him.

Twenty years later during the week of the high-school reunion Calvin is working a dead-end office job with marriage problems and a house in suburgatory. After a chance meeting he catches up with Robbie who now calls himself Bob Stone and has morphed from the shy fat kid from high school into The Rock – a cartoonist’s impression of an action hero who has somehow come to life. Turns out that Robbie now works for the CIA and is running from a rogue intelligence agency, who now thinks Calvin is involved.

Dwayne Johnson, AKA ‘The Rock’ is the biggest star on the planet right now (both in star power and probably in physique as well). He’s one of those stars who is impossible to dislike with his social media presence and the way that he’s willing to make fun of himself. He has the body of a demi-God and to call his biceps ‘guns’ is doing a disservice to hand-held firearms; it would be more accurate to describe The Rock as packing heavy artillery – the Germans could have used his biceps to bombard Paris in 1918. 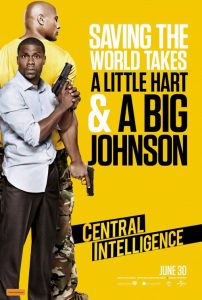 Alongside him stands Kevin Hart, who in a role which is virtually the same as in Ride Along and Get Hard is a likable every man who is thrown into extreme circumstances where he freaks out and talks very fast, and makes references every so often to the fact that he’s black. With two of the funniest men in Hollywood at the helm, the question then becomes: how is it possible they have ended up in such a depressingly unfunny film?

Over the last few years Hollywood comedy has devolved into the mess you see before you. Central Intelligence thankfully doesn’t go down the Seth Rogen route of gross-out humour, but it’s mired in the lowest version of jokes there is: pop culture references. These aren’t jokes; they’re just characters mentioning things that happen to be in the zeitgeist at the time, which apparently qualifies as comedy now.

Comedy is of course totally subjective but there’s always a certain bar that needs to be met. Critic Mark Kermode has a good benchmark with what he calls the ‘Six Laugh Test’. If a comedy can make you laugh six times it’s doing its job. Over the 108 minute running time Central Intelligence made me laugh once. One single lonely chuckle for a reference which was actually quite funny – but which was then immediate ruined when a character replied with “Damn, that’s such a good reference!”

It’s amazing that a story that is so generic and clichéd can also be convoluted. None of the twists make any sense and the script does that really annoying thing where it throws in feel-good messages in the third act to trick you into thinking the movie has a heart when it has done absolutely nothing to back the message up.

The action is as bland as action gets. All the scenes are over edited which make it look really messy and it has that really lazy brand of action where none of the bad guys can aim their guns. Yes, I’m nitpicking now, but if I’m sitting in a cinema wondering why all these bad guys are missing at point-blank range then I’d say that says more about the film than it does about me. What we’re left with is a film that markets itself as an action/comedy with terrible action scenes and a painfully unfunny vein of humor.

Perhaps the most disappointing thing about Central Intelligence is that it takes two of the funniest actors currently in Hollywood and proceeds to squander all potential by serving them up alongside a generic, poorly scripted, plot-hole riddled mess. The Rock is always great and there are a few surprise cameos which are fun but still, what a waste.

Central Intelligence is in cinemas from 30th June through Universal Pictures.

Written By
Simon Storey
More from Simon Storey
The youngest man to ever win the Oscar for Best Actor was...
Read More