Filmmaker Ivan Sen returns to the world of his previous film Mystery Road with his new thriller Goldstone, which continues the adventures of Aboriginal detective Jay Swan, who is again brought vividly to screen with an incredible lead performance by Aaron Pederson.

Following the death of his daughter, an alcoholic Swan is sent to the rural mining town of Goldstone in search of a missing Asian woman, where he is again forced to confront the institutionalised racism and corruption of a small town. Here he is introduced to the town’s one local cop, the young Josh (Alex Russell) whose soul is being fought for between Swan and the rest of the town, including the mayor (Jacki Weaver) and the corrupt owner of the mine, Johnny (David Wenham). 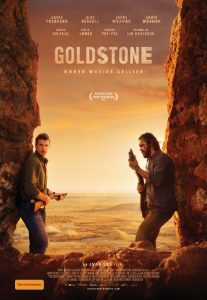 Led by a heartbreaking turn from Aaron Pederson, who captures the incredible tragedy of his character with remarkable finesse, the ensemble cast of the film is one of its major assets. Russell, as the young cop who may or may not turn bad, continues to establish himself as young leading star. The supporting cast includes two of the country’s best Aboriginal stars in Tommy Lewis as a corrupt elder and David Gulpilil as Jimmy, who comes to act as the films spiritual conscience. Wenham is hilarious as the slob of a boss and Weaver is great, even if she is essentially recreating her Oscar nominated role from Animal Kingdom.

Again doubling as cinematographer, Sen creates a gorgeous western landscape infused with a strong noir aesthetic. Like its predecessor, it is a visually gorgeous movie. Sen’s music also underscores the darkness that lies all throughout the characters and events of the film. As far as creating mood and feel, Sen is an Australian filmmaker almost without peer. The tense shootout climax of the film is one of the great action set pieces of Australian cinema, even topping the end of the previous film.

Less successful, but by no means disastrous, is Sen’s screenplay. His dialogue too often labours under the weight of overly obvious subtext which could easily have been discarded to even greater effect, but on the plus side it gives actors of such strong calibre something to chew on.

Not quite as good as Mystery Road, Goldstone is still a riveting thriller, again anchored by an incredible leading performance from Pederson and the rich style crafted by Sen. It’s well worth your time.

Goldstone is in cinemas from 30th June through Transmission Films.