Based on the novel by screenwriter Jojo Moyes, Me Before You is director Thea Sharrock’s feature debut. Starring a pair of beautiful Brits, it deals with dark subject matter, and viewers are best advised to carry tissues and to go easy on the mascara if you don’t want to look like a panda by film’s end.

Lou (Emilia Clarke) is a bubbly young woman who has never experienced much of the world. After she loses her job at the local bakery she applies for a carer’s job at the wealthy Traynor estate. Here she meets Will Traynor (Sam Claflin), a dashing young man who had the world at his feet until an accident left him a quadriplegic. Depressed and resentful of all that he can’t do, he isn’t having a bar of Lou’s chirpy manner. But she slowly manages to bring some light into his life, while realising the possibilities that exist within her own.

Some disability advocates have been outraged over the subject matter of Me Before You, but to go into this in much detail would require spoiling major plot points. Suffice to say, the film is not simply a light weepie, but rather one that deals with some serious issues. Despite the outrage of some, there are also those who believe the film does justice to the population that it endeavours to portray, with many claiming to identify with Will’s mindset. Viewers with disabilities may be well-advised to do some further research before choosing to see this film, however, as they may too find themselves offended and disheartened by the narrative. 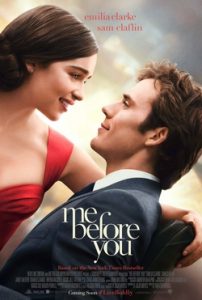 That’s not to say there aren’t some lighter and heartwarming moments, and Clarke and Claflin make a wonderful pair. Taking a break from her most famous role as Game of Thrones’ Daenerys Targaryen, it’s almost like we’re watching a different person as Clarke almost bubbles over as the supremely likeable Lou (whose last name is incidentally also Clark). Lou’s zany fashion choices add another layer of quirk, and she is a barrel of laughs up until the moment she makes you cry your eyes out.

Claflin’s acting is restricted to his face and oh what a face it is. Those eyes! That smile! And while he’s not exactly representative of the disabled population (he’s mega rich) he captures the heartbreak of losing so much of what we take for granted. That includes sex, and when he tells Lou if only she knew what he wanted to do… the heart melts.

Neville Longbottom a.k.a. Matthew Lewis stars as Lou’s boyfriend Patrick, but we’re not rooting for him this time in his role as douchey gym junkie. In further supporting roles as Will’s parents, Janet McTeer and Charles Dance put in admirable performances, as does Stephen Peacocke as Will’s doctor Nathan, while Doctor Who’s Jenna Coleman as Lou’s sister feels like she belongs in an S Club 7 music video.

While there are a more than a few clichéd moments and bits of awkward dialogue here and there, Me Before You raises some important questions and doesn’t settle for a Hollywood ending. It will more than likely set off the waterworks in most viewers, and some might prefer to wait to watch this in the privacy of their own homes. I’m personally a restrained crier in public, so I mostly sat with a lump in my throat as tears rolled down my face. If I’d watched this at home I would have been an absolute mess. The choice is yours but just make sure you have tissues handy. I’d suggest a few boxes.

Me Before You is in cinemas from 16th June through Roadshow Films.

Written By
Claire Robson
More from Claire Robson
Six years after Frozen took the world by storm and infiltrated its...
Read More