If you haven’t understood the appeal of Teenage Mutant Ninja Turtles by the age of twelve, you’ve probably missed the boat. The teenage bit is simple. The group dynamic I get. There’s the dull, level-headed leader; a dumb, tough guy; an equally dumb, but loveable comic relief guy; and the token number-crunching nerd. It’s just the turtle bit that loses me. Maybe that’s just a sign of my inherent racism against martial-arts trained turtle-people and precisely why I’m not the person to be reviewing this, but too bad.

Carrying on from the first instalment, the menace in Dave Green‘s Teenage Mutant Ninja Turtles: Out of the Shadows is again the steely-eyed Shredder (Brian Tee), one of the less effusive supervillains you’ll come across, who has recruited a giggling evil genius scientist (Tyler Perry) to help him conquer the world. But when Shredder’s escape plan from prison is hijacked by the even more evil and more genius Krang – a giant talking brain – Shredder is recruited into Krang’s bigger, extra-terrestrial plan to not only conquer but destroy the world. Which of course, Shredder is totally down with. “Where do I start?” he says, and promptly receives a nifty weapon to help – a substance that can activate in humans the dormant genes of our evolutionary ancestors. For the record, apparently humans evolved from, among other things, rhinoceroses and warthogs. 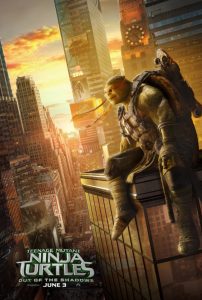 Of course, it’s up to what renegade cop Casey (Stephen Amell) calls the most pretentiously named superhero gang in existence – Leonardo (Pete Ploszek), Michelangelo (Noel Fisher), Donatello (Jeremy Howard), Raphael (Alan Ritchson) – to stop Shredder, Krang and their henchmen in their tracks, but not before the laws of physics and biology have been given a hefty rewrite.

At some point or another, sense seems a bit beside the point, and getting to that point is reasonably entertaining in the most lightweight, thoughtless way imaginable. Laura Linney as the bewildered cop looks confused, which is understandable; I don’t know why she’s there either. Will Arnett on the other hand, returning from the 2014 original, is more at home and is always good quality. He and Amell make a good fist at keeping the banter lively. As for Megan Fox, well, you can see the Michael Bay influence when she manages to go from smart professional attire to miniskirt in five seconds flat for reasons that could be described as nothing less than tenuous.

It’s here that you might agree with the common theme arising in the reviews – something along the lines of ‘being written for 12-year-olds by 12-year-olds’. At times it’s true: chaotic, shallow heroes, shallower villains and the most cursory of attention to supporting characters or subplotting. But in fairness to writers Josh Appelbaum and Andre Nemec, that seems to be the point, as there is calculation to the madness that owes something to knowing who their audience is. TMNT2 could have dug deeper into the themes of discrimination and alienation that threatened to be explored, but people don’t come to see TMNT movies for in-depth social justice statements. They come for special effects, good banter and heroes getting the job done, and it seemed to work for the fans at the preview, which I presume is the main thing.

Teenage Mutant Ninja Turtles: Out of the Shadows is in cinemas from 9th June through Paramount Pictures.