If the #OscarsSoWhite controversy didn’t make it clear, then Mr Generic Superhero von White Dude number 37 should be proof enough that Hollywood and mainstream American cinema has a diversity problem. This can be seen with perfect clarity in the recent study done by Polygraph which made it clear that the gender dynamic in the films we all watch is totally skewed. This isn’t progressive Lefty twaddle, it’s the facts. Women make up half the human race so it stands to reason that they should have equal standing in cinema, and yet strong roles for women still seem to be few and far between, much more so for women over a certain age.

At the end of the day art is only as good as the culture that surrounds it, and the culture that has birthed current mainstream Hollywood certainly seems to have dropped the ball with this one. But things aren’t all doom and gloom. The problem is getting more coverage than ever before and it’s only once you diagnose the issue that any steps towards addressing the problem can take place. You need to actually see the dropped ball before you can go pick it up.

A step in the right direction is Hello, My Name is Doris starring sixty-nine year old Sally Field as the titular Doris. Director Michael Showalter creates a film which gravitates around the life of an older woman who in nearly any other film would just be a bit player who ends up giving wise advice to the protagonist.

Doris is a sixty-something woman in New York working as a drone in an office cubicle. She’s the strange old lady of the group that everyone seems to have affection for. She stutters around in knitted jumpers and the kind of dangly earrings that Margaret Pomeranz would be proud of. At the beginning we meet her just as her mother has died, leaving her alone in a large house with no children and no major milestones left. Only the slow and depressing descent in old age is left for her. This is until the office acquires a new employee, the young and ruggedly handsome John (Max Greenfield). With help from her no-nonsense best friend Roz (Tyne Daly) and her granddaughter (Isabella Acres), Doris tries to make some form of romantic connection with a man half her age. 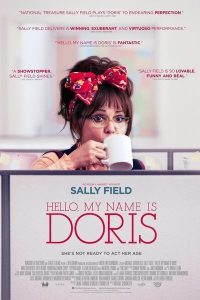 Working from a screenplay Showalter co-wrote with Laura Terruso, and adapted from a short film called Doris & The Intern, this is a film with genuinely nice intentions and a great central performance, but nearly nothing else. It’s perfectly adequate as a film but that’s about it, there is nothing here to really sink your teeth into and whatever good will it generates is lost by just how forgettable it all is.

Sally Field carries the film almost alone and her Doris is a lovable but frustrating character to spend a film with. She carries items home from the street to add to a collection of junk she hordes in her home, adding a rather dark subplot involving her brother and her therapist trying to clean her house out. The therapist is played by Elizabeth Reaser just like in the first season of True Detective. Sally Field manages to be the glue which holds the many pieces of this uneven film together, and whatever degree of success it operates on is directly attributed to her. There’s also the uneasy question which hovers above the first half, when it’s not clear if we’re supposed to be laughing with Doris or at her.

Quite a cast has been assembled but most of them have nothing much to do. Max Greenfield and Sally Field make quite a pairing, but whatever nuance they bring to their performances aren’t enough to spice up the bland whole. It was nice seeing Rich Sommer from Mad Men, but since he plays a character who works an office job in Manhattan and wear a bowtie, it can’t have been too strenuous on his acting talent.

There’s a fine line between charming indie quirk and insufferable hipster wank; what side of the line Hello, My Name is Doris falls into will depend on the viewer. You would have to be one hell of a pessimistic bastard to take issue with this good natured film… But unfortunately I am very pessimistic and a total bastard, so it lost me very quickly and started grating shortly after.

There’s nothing wrong with a film which tries to be ‘feel good’ and the very progressive road which Doris walks is admirable, if you’re that way inclined, but it shouldn’t come at the cost of tone or substance. Hello, My Name is Doris has good intentions and it’s great to see a film led by an aging actress, but it vanishes from memory the second the credits start rolling.

Hello, My Name is Doris screens exclusively at Cinema Nova from 9th June through Sony Pictures.

Written By
Simon Storey
More from Simon Storey
At some point there must have been a very strange series of...
Read More