If the 21st Century has so far been the ‘Electronic Century’ then it’s safe to say that the 20th was for sure the ‘Electric Century’. Australian documentarian Lawrence Johnston’s latest effort is Neon, a fairly self-explanatory title for this unique and quaint little film which celebrates one of the defining symbols of twentieth century electronics.

The history of neon begins, like so much of modern day technology, with Nikola Tesla. Forty years before it became a world craze he took glass tubes and bent them into the names of fellow scientists, effectively creating the neon signs that we all know today. Cut to Paris during the Roaring Twenties and neon had become the worldwide phenomenon that had such an impact over the next eighty years.

It isn’t often that a documentary comes along about such a niche subject, but Johnston has rallied an amazing selection of people to discuss all things colorful and electronic. Neon artists, art critics and cultural commentators all contribute with a passion that usually isn’t associated with signage – at one point a woman is so overwhelmed with her passionate love of neon she is reduced to tears. I can’t imagine where they found her, but I’m glad they did. 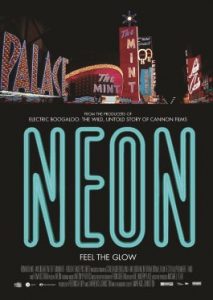 There’s footage taken from all over the world, captured very well by cinematographer Eron Sheean, from the ‘Neon Capital of the World’ Las Vegas to visual smorgasbord that is Tokyo. A lovely surprise comes about half way through when Melbourne gets some love. Local neon landmarks which include the Allen’s Lolly sign, the Skipping Girl Vinegar Sign and Lygon St’s Pelligrinis are all shown off in loving detail. There’s also the iconic entrance to Crown Casino which was a very unexpected but welcome surprise for me personally, because I work there.

It’s always nice when a documentary can make you look at something in a completely new light (forgive the pun) and Neon’s greatest strength is that it takes an item we see every day and brings it to the forefront of the mind. It makes you think about something that usually doesn’t get a second thought, which is always a great feat for a documentary. There’s also a treat for film lovers, as many iconic images are discussed which makes you realize just how many great films used neon in key scenes – The ‘Bates Motel’ sign from Psycho being the most prominent.

All in all, Neon is a very informative and very nostalgic look at a piece of electronics that practically defined the 20th century. It’s not for everyone but for a certain niche market this will be a treat.

That being said, it may outstay its welcome – there’s only so much interesting content that you can get from people talking about neon. Stretching it out to feature length may not have been the best use of this topic.

Neon is screening exclusively at Cinema Nova from 2nd June through Ronin Films.

Written By
Simon Storey
More from Simon Storey
Not to be confused with the exceptional 2011 film starring Felicity Jones...
Read More