What would you get if you managed to put Mullholland Drive, The Room, Groundhog Day, Cabin in the Woods, Breaking Bad and Cruel Intentions into a hypothetical cinematic blender? Probably something pretty close to Blood Punch, a movie that flies in the face of convention and genre.

What’s most interesting about this drug fueled murder ballad is it all comes from the minds of children’s entertainment. A quick glimpse at writer Eddie Guzelian’s resumé comes up with exclusive work on films such as The Tigger Movie and the Lilo and Stitch sequel. First time director Madellaine Paxson‘s resumé likewise is composed of writing credits for children’s TV. The three stars and the creators all appear to know each other from a 2009 Power Ranger incarnation series. What culminates is a film which feels like it was created by an eleven year old Hannibal Lecter. 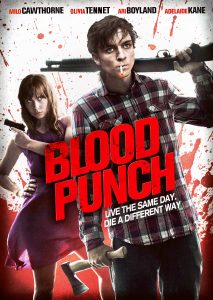 Beginning within a crystal meth rehab meeting, a disarming woman takes a seat. Introducing herself as Skyler (Olivia Tennet), she freely admits to being there to network for a meth cook. Chemistry graduate/hopeless romantic Milton (Milo Cawthorne)answers her call. Together they drive to the middle of nowhere with Skyler’s boyfriend Russell (Ari Boyland) to begin cooking. Here is where things get interesting. Without giving too much of the clever plot away things get very complicated. Betrayal, revenge, lust and humour ensue in spades.

The three players come together to form a unique internecine love triangle. Milton and Skyler have a great chemistry together. There’s a vibe between the two which harkens back to teen slashers of the 80s. But it is baby faced jock Russell who steals the movie in a weird way. In a movie that frequently alternates between serious thriller and B-grade tongue-in-cheek horror, Russell’s character is full of gut-busting ironic humor. It’s almost as if Ari Boyland has received a different script and plays it like he’s in The Bold and the Beautiful. After showing up to arrest Milton, he reveals himself to be in on the plan. In total hostility to his new partner he answers the legitimate question “I thought you were a cop?” by throwing his police hat into the distance and declaring straight faced, “I’m not. Not anymore. I just f—king quit.” It radiates delicious melodrama. At times it works though at others it can spoil the tension.

The punctuated video narration from Melton is confusing and sketchy at best and serves little purpose, but overall Blood Punch is rollicking fun. Madellaine and the entire crew have done an applaudable job with a limited budget. It would be interesting to see the film made with a Hollywood budget, although much of the cache stems from the low budget campy vibe. Above all else the script and writing deserve accolades. Though it ends in a somewhat unsatisfying aposiopesis, Blood Punch is a truly clever film which will confound and entertain most mature audiences.

Blood Punch is available on DVD/VOD from 25th May through Bounty Films.