Andy Whitfield and his wife Vashti have been together for thirteen years, married for ten, and are enjoying the perks of Andy’s success as an actor, their two adorable children and a happy marriage, when they are given the awful news that Andy has cancer. Documenting their experience from the moments of diagnosis, Be Here Now: The Andy Whitfield Story charts their journey through treatments, testing, and further diagnosis, over an eighteen month period until Andy’s death. Filmmaker Lilibet Foster works closely with Andy and Vashti to create a heartbreaking, yet inspiring documentary feature.

Andy is an actor and model, a former engineer who found success in the television series Spartacus. Footage of Andy in ‘gladiator training’, preparing for his starring role, show a strong, fit young man – a perfect specimen – seemingly in his prime. When his diagnosis comes through, he has a ‘good’ cancer, Andy and Vashti prepare for the challenges ahead with a sense of optimism. They take the same approach which has seen them achieve many previous successes, which is to stay positive and focused, to ‘be here now’. 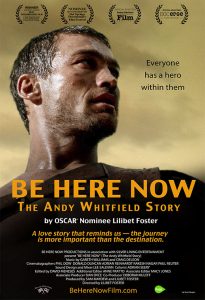 The Whitfields have a remarkable outlook, and as the documentary progresses their resolve is tested. Their attitude and approach to life is well and truly questioned throughout Andy’s illness, which includes eleven chemotherapy treatments in a twelve month period. Andy is given a mere six months to live. He then gets the all clear and is told he is in remission, before he is later given further heartbreaking diagnoses. The resilience of their peaceful natures is proven when they continue to stay positive, regardless of the news they are given, be it good or bad.

While the focus of Be Here Now is Andy and his experiences, Vashti is the most forceful presence. Much of her journey is something of a ‘B Story’, but regardless she shines through. In one particular moment, Andy and Vashti converse about his treatment options, with Andy expressing his disappointment that he feels unsupported. He wants to try alternative medicines, including a trip to India, before chemotherapy. He feels as though everyone thinks he is crazy. Vashti is soon in tears, relating her nightmares, her grief for her friend who passed away three years to the day, and her exhaustion from keeping up with all the needs of their family. Indeed, as she is speaking she moves furniture and opens doors for their toddler daughter. Andy is visibly humbled: he might be the one who is sick, but the rest of his family are living with cancer too. These moments between Andy and Vashti are insightful and sobering, but they serve to highlight Vashti’s strength and presence, her unwavering dedication to her husband.

Documentaries on cancer, and feature films as well, are all too common now. Unfortunately these are stories too many can relate to. What Be Here Now brings to this body of work is actually a lovely example of a marriage based upon a shared sense of how to make one’s way in the world.

Be Here Now: The Andy Whitfield Story plays in cinemas thanks to the cinema on demand platform, TUGG. For session times go to tugg.com.au – if you can’t find a location near you, TUGG allows you to host your own screening and sell tickets via your social media channels to your mates and colleagues.

Written By
Amy Taylor
More from Amy Taylor
The Falling is beautifully filmed with a mesmerising score but the overall...
Read More