This certainly isn’t Alice’s Wonderland – that quaint dreamscape of Lewis Carroll’s, where twisted logic and thoughts aloud craft both perfect linguistic sense and utter nonsense all at once. If you saw Tim Burton’s Alice in Wonderland a few years ago, you would be familiar with the alternative Wonderland. Revisited in Through the Looking Glass by director James Bobin and screenwriter Linda Woolverton, Disney’s Wonderland is a roiling mess of colour dripping tired platitudes about lives well lived, and host to yet another variation of Johnny Depp acting with his eyebrows.

This is not to say the design here isn’t spectacular, it’s just that there are so many confected worlds on screen these days that they lose their novelty. It is also not to say that the story lacks potential. It is just that the majority of the characters, despite the cast’s best efforts, are too stale to deliver it.

In what is a surprising opening, Alice (Mia Wasikowska) is now a maritime explorer and a captain, fleeing pirates no less. After being summoned home from the world, she finds that Hamish (the toff played by Leo Bill, whose proposal she publicly rejected in the first film) has taken over from his deceased father as head of the shipping company and is threatening Alice’s future as a captain of her father’s old ship. 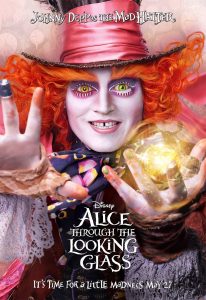 She wants out, and in the process ends up stumbling through the looking glass back into Wonderland, where even bigger crises are emerging. There is a matter with the Hatter. Alice thinks he’s dying, but he simply insists that his family is still alive, despite almost certainly having been killed by the Jabberwocky. Alice must apparently perform the impossible task of finding them. However, by Alice’s mantra, things that are impossible are only impossible as long as you think they are impossible – or something along those lines – which seems a lot like The Secret, but it seems to work for Alice.

The plan: she must steal the Chronosphere from Time himself (Sacha Baron Cohen), travel back in time and save the Hatter’s family before time stands still.

It is easy to see Wasikowska’s appeal, and she is a talent, but despite her best efforts she isn’t the most memorable Alice. Given there’s only one live-action Alice I can think of, that’s not a ringing endorsement of the franchise. Though given the amount of running and jumping she does here, I reckon she’d make a good run at American Ninja Warrior. It’s nice to have a heroine who doesn’t arse about with moral dilemmas. If she wants to save a friend’s family and potentially destroy the world in the process, then so be it – let’s get a bloody time machine already.

The staleness here owes more to the writing and direction. While it has the appropriately wacky visuals, any quirks of Carroll’s prose are milked of subtlety here. It must also be tough presenting to a green screen much of the time, and the humans here do seem rather stilted. Meanwhile Anne Hathaway’s White Queen has been left to flounder around gasping epiphanies and waving a jittery hand.

The uninteresting nature of the White Queen is indicative of a larger problem that plagues the Alice franchise. It may screen in 3D, but the characters always make you think twice. Indeed with most of the cast here appearing mostly by virtue of their presence in the first film, with little comedic or plot value to add, anyone who isn’t Helena Bonham-Carter or Sacha Baron Cohen seems ornamental. They are the stars here, there is no doubt. It is hard to label it as anything but energy – it may also be the costumes, or the characters or their natural malevolence – but when they are in shot, the stakes are higher, the laughs louder and time passes much quicker.

Alice Through the Looking Glass is in cinemas from 26th May through Disney.