In 2013 Jeremy Saulnier made a name for himself with the release of the acclaimed Blue Ruin. Following it up with another unapologetic slice of genre filmmaking, Green Room is a very satisfying thriller which may prove to be a new favorite of thriller lovers and put gore hounds in heat.

‘The Ain’t Rights’ are a punk band doing a low key tour through the Pacific North West, driving through in a kombi van and siphoning petrol as they go. They’re the kind of band that the members, including Anton Yelchin’s Pat and Alia Shawkat’s Sam, will look back on in the future and cringe. Through torn jeans and long unwashed hair they belt out wannabe heavy metal oblivious to the fact that they really aren’t any good.

After a chance encounter they get a gig at a remote commune and manage to win over the crowd with their head banging cacophony. One catch – the commune is home to a fully committed sect of Neo-Nazis led by their very stoic leader Darcy (Patrick Stewart). After a series of blunders the band find themselves trapped in a back room of the building with Amber (Imogen Poots) and at the mercy of an entire community of, to steal a line from The Girl with the Dragon Tattoo, the most detestable collection of people that you could imagine – Nazis, as in genuine Third Reich idealising Neo-Nazis. 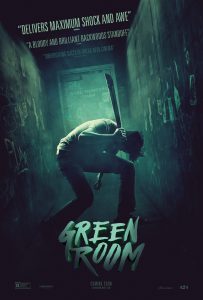 After a slow start Saulnier turns it up to eleven. Blending the heart pounding action scenes of a great thriller with the splattery goodness of a slasher, this is one hell of a ride. The warehouse where most of the film takes place is a fantastic bit of set design; Ryan Warren Smith and Jenelle Giordano have done an exceptional job of making this den of skinheads as nasty as possible. Cinematography by Sean Porter compliments it greatly.

Perhaps the most surprising feat that Jeremy Saulnier accomplishes out of this whole project is turning timid baby-faced Anton Yelchin into a complete badass. Seriously, the love struck puppy from Like Crazy is now a machete wielding renegade, which is something that sounds faintly ridiculous but boy does he deliver. Yelchin has been hanging around the edges of popular culture for a while now with his only mainstream appearance being in J.J Abram‘s Star Trek reboot, but he’s been in some genuinely great projects along the way. A little like Brie Larson’s recent quantum leap into stardom, Yelchin hopefully has great things coming in his future.

The villains of the piece are the best kind because as repulsive as they undoubtedly are, they’re all the more eerie with the knowledge that people like this actually exist. Patrick Stewart, who is one of the greatest actors who has ever lived, isn’t the kind of actor who you’d expect to appear in this kind of film but he delivers a fantastic performance as the reserved and calculating Darcy. Speaking to my fellow Batman fans – If Hugo Strange ever makes it to the big screen this role is proof that Stewart would be the perfect fit for the role.

The violence pulls no punches and is all the stronger for it. It sets out to make the viewer squirm and it fully succeeds. Yet it also manages to have a few moments of humor that don’t seem out of place and throw the tone off, which is a difficult thing to get right but Saulnier does very well.

Ultimately Green Room is the best that genre filmmaking has to offer. Like a well-made super spicy meal it’s occasionally unpleasant but still one hell of an experience – not for those of weak stomach.

Green Room is in cinemas 12th May through through Rialto.