For this review, let’s put aside the questionable taste in releasing a film – something meant to be a piece of action popcorn entertainment – about terror attacks in Paris less than six months after the terrorist attacks that rocked the city.

In Bastille Day, Richard Madden (Game of Thrones) plays an American pickpocket in Paris running away from everything (“mostly himself” as we’re expositionally told), who finds himself in a bad situation when he lifts the wrong bag – a bag with a bomb in it. When it explodes, a CIA agent new to the city, Sean Briar (Idris Elba), is hot on his heels. Briar is reckless, a loose cannon who doesn’t play by the rules and works on hunches (his clichéd character just told us in dialogue in the opening scenes). He’ll do whatever it takes to find out who’s responsible and stop the threatened next explosion. This mismatched pair will have to work together to track down the real bombers and uncover a plot that goes all the way to the top.


This serviceable thriller acts primarily as a showcase for its two leads. There’s no doubt about the talent of Elba, and the film does little for him but allow him to make a strong case for how easily he could slip into the shoes of James Bond. This role gives him little to work with in terms of character depth, but it does allow him to show off his physical side and demonstrate that he can carry a film. For Madden it’s a more important role, and as someone who’s transitioning from TV to movies, it’s a decent starting point. He’s cultivating a new image away from being the boring Stark brother, trying on new personas, trying to show range. And he does fine. He shows that he’s got promise, that he can quip, can fight, can (almost) hold an American accent for a whole film. Although not on the same level, he almost reminds viewers of a young Matt Damon in Ocean’s Eleven, and not just because they play practically the same character. 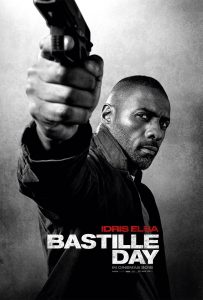 Speaking of Matt Damon, Bastille Day plays like a lighter, less well made version of the other JB of action movies – Jason Bourne. While there are some smart lines and a few laughs, the script is often wooden, weekly defining characters and their motivations, and let down with dialogue like “Release the hashtags”. (Interestingly Bastille Day’s writer Andrew Baldwin will pen the sequel to the Jeremy Renner Bourne spin-off). The film is also let down by the pedestrian direction of James Watkins, who previously helmed the similarly middling films The Woman in Black and Eden Lake. It’s not bad, just not visually interesting, gripping, or in any way different to a hundred other passable action movies. There are some nicely staged action scenes, including a rooftop foot chase and a well coordinated fight in the back of a moving van, but it’s guilty of one of the gravest modern action movie sins – too many cuts during fights. The most acclaimed action movies of the last few years – like John Wick – have succeeded in part by letting the fights flow, allowing the physicality of the performers to shine.

There’s potentially interesting territory to be explored in the film’s plot – exploitation of anti-immigrant and anti-muslim sentiment, false flag operations, American spying and involvement on foreign soil – but unfortunately the film is not as smart as it thinks it is. It ends up being a mash of clichés, focusing on the idea of an insider heist – one that’s been liberally lifted from films where it’s been done better – and relying on the majority of characters becoming incredibly inept in order for everything to work out. The film also fails to take advantage of its Gallic setting, relegating Paris to a nothing backdrop – something that can’t be helped by being directed by a Brit and having Americans as the heroes (well, Brits pretending to be Americans).

Bastille Day is then just one for the fans, one to pass the time – far from revolutionary and not a cause for celebrations.

Bastille Day is in cinemas from 12th May through StudioCanal.

Written By
David Nagle
More from David Nagle
Last week’s episode of Louie appeared to herald a return to an...
Read More