Captain America: Civil War isn’t much of a Captain America movie, more an Avengers ensemble. The civil war part of the title too, is certainly an aggrandisement; rather this is one or two steps above a gentleman’s disagreement. Lacking brevity, with an overflow of locations and characters, the latest feature from Marvel Studios seems content to safely satisfy its fan base, taking few risks.

Amongst the testing 150 minute running time fans can expect to see the return of most major players and a few of the lesser-knowns rounding out the dozen or so heroes. Robert Downey Jr. and Chris Evans as Iron Man and Captain America share the majority of screen time as a disagreement between the two causes a fracture amongst all other superheros.

Wrestling with personal responsibility for collateral damage, Ironman is confronted by a mother who blames him for her son’s death from a previous battle. Compounded with political global pressures he urges fellow Avengers to hand over control of the group to the UN. Captain America feels differently, preferring to take responsibility for his own actions. His doubts on signing the UN accords are galvanised hearing the eulogising of his deceased partner. In another context the speech about doing what you (subtext America) believe is right even when the world disagrees would make great satire for Trey Parker and Matt Stone. Forced to go rogue he finds himself at odds with Black Widow (Scarlett Johansson) and Tony Stark after helping out his old friend Bucky Barns AKA the Winter Soldier (Sebastian Stan) framed for a terrorist attack. Iron Man chases down his now vigilante friend to arrest him. Despite having just promised to restrain himself from risking civilian lives, Iron Man deems it necessary to confront his friend midday in Berlin airport. Both parties have found numerous superhero pals to take sides in the mother of all school yard confrontations. 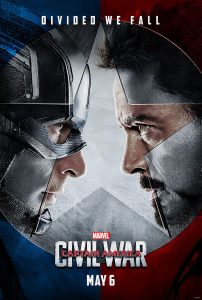 Amongst the settings of Nigeria, Vienna, Bucharest, Brooklyn, Berlin and Siberia the cast is routinely juggled around for screen time. Scarlett Johansson is busy acting as unofficial grief counsellor for the Avengers in between one-on-one fight sequences. Robert Downey Jr. coasts through on his cheeky chutzpa and hubris again. Chris Evans delivers a solid yet unremarkable performance. Paul Bettany does well behind his CGI costume as Vision. Stronger, interesting performances are found by Sebastian Stan as Winter Soldier and Don Cheadle as War Machine. Newcomer Tom Holland displays an affable and somewhat dweeby slant as a rookie Spiderman, and Daniel Bruhl deserves the most praise for the acting range he brings as Zemo, antagonist and secret mastermind of the ostensible civil war. However, with every other cast member hindered by two dimensional writing the bar is set low for him.

The big problem with Civil War lies within the script, which throws in everything but the kitchen sink and rational.  Marvel specialists Christopher Markus and Stephen McFeely are the guilty parties painting morality with thick black and white strokes. The film recycles through plot forwarding dialogue and inserts comical quips mathematically between blows. Though glossed over, inconsistencies within the picture do stack up. Why are all heroes – particularly the non-super ones – seemingly impervious to bullets? Why does the US secretary of State supersede the UN on a whim? Why does the CIA keep a multi-billion dollar submersible prison holding a handful of plastic cells? Many crucial motivations and decisions are nonsensical even within the context of superhero fantasy, particularly the evil plot revelation trope of Zemo’s convoluted plans.

Propping up Civil War is the undercurrent of anticipation. Something always needs to be corrected or investigated by someone at some point. It certainly helps that these films are created for almost any attention span. The final act of the film is quite good though. Intense themes of betrayal and revenge make for a great electric conclusion in a film that lacks gravity. Independent tension that could be built within Civil War has been muted by the invisible strings keeping the franchise moving towards whichever feature is scheduled next.

Captain America: Civil War is in cinemas from 28th April through Disney.