Eddie Edwards (Taron Edgerton) competed in the 1988 winter olympics, the first British ski jumper since the 1920s. Eddie the Eagle is is his story.

Well, the gist at any rate.

That’s the thing with adaptations. A screenwriter (in this case, Simon Shelton and Sean Macaulay) must peel away the onion layers to get at the core story, because there’s only so much celluloid you can use before people start checking social media for the next big thing. In some cases this leaves the result unrecognisable as compared to the original (Blade Runner vs Do Androids Dream of Electric Sheep). In others, it’s a streamlining of the story (The Imitation Game). Sometimes it’s the removal of the entire last chapter of the book (the original The Big Sleep with Humphrey Bogart and Lauren Bacall).

But the question is whether this actually matters.

Eddie the Eagle is not a documentary; it’s entertainment. He’s the archetypal underdog, an amateur competing against professional athletes among other solid obstacles. There’s his dad (Keith Allen), who wants Eddie to give up his dreams to be an Olympic athlete, because plastering is a job with a future. There’s British Team administrators (Tim McInnery and Mark Benton) who don’t think the sponsors will go for such an awkward athlete. And once he gets to Germany, there’s smarmy judgemental Germans (Rune Temte and Mads Sjøgård Pettersen) who point and laugh because Eddie’s been jumping for three weeks rather than a lifetime. 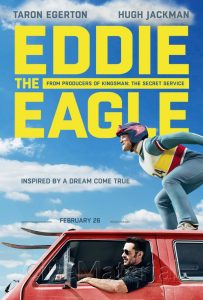 Even his trainer, ex-Olympian Bronson Peary (Hugh Jackman) has little confidence in Eddie’s skills. And to be honest, he’s right. Eddie is about as elegant in the air as a house brick.

But house bricks don’t get movies made about them. Because like the Jamaican bobsled team who also competed in the ’88 Olympics (and got their own movie, Cool Runnings back in 1993), Eddie The Eagle is worth watching simply because he doesn’t have a hope in hell of winning. So unlike the deadly dull tale of Lance Armstrong (The Program), we have a story with an underdog we can really cheer for, ultimately because he’s really an audience surrogate. And speaking of audience surrogates, there’s liberal use of body cameras to really put us in Eddie’s ski-boots, and this is one place where the 3D craze might actually have been of use. So hats off to cinematographer George Richmond. Similarly, staging and direction from director Dexter Fletcher is workmanlike, and editing by Martin Walsh pushes the story along so the 100 minutes of screen time fairly fly past.

However, there’s one odd note to the flow of the movie. Warren Sharp, Bronson’s ex-coach has written a biography which mildly colours the relationship between Eddie and Bronson. And as soon as we see it’s Christopher Walken on the cover, it’s obvious he’ll appear at some stage in the proceedings. When he does arrive, it’s during Eddie’s final jump where the movie is soaring along, and brings the story back down to earth with a crunch of narrative bone. The filmmakers could just as easily have stuck a stock photo on the book and thus removed the need for Walken to even be there, for while he’s a great actor, he seems utterly wasted in his two scenes.

In the end, you have to make a decision what sort of movie you want to see. If it’s a documentary about the life of Eddie Edwards that you want, then this is not the movie to watch, because even he has said liberties were taken. On the other hand, if you want to see something that’s inspirational and ticks all the underdog-against-the-odds boxes, Eddie the Eagle is the movie for you.

Eddie the Eagle is in cinemas from 21st April through 20th Century Fox.

Written By
Lisa Sinclair
More from Lisa Sinclair
It's good that there's been a year between season two and three...
Read More