The love story between Timothy Conigrave and John Caleo has become quite familiar by now. 2015 marked twenty years since Conigrave’s memoir, Holding the Man, was published, as well as the release of the film adaptation. Audiences globally have become very aware with the love story that began at Melbourne’s Xavier College in 1974 thanks to the book, the film and stage adaptation written by the film’s screenwriter Tommy Murphy.

As well as being known as a seminal testament of the AIDS epidemic, Holding the Man is universally recognised as a poignant love story about two men whose passionate and long-lasting relationship battled prejudices, disapproval and ultimately death. An added level of poignancy was that both men never saw the success that came from the book and its adaptations.

This is where Remembering the Man plays a significant role.

Serving as the narrator, recordings of Conigrave’s voice is used from a recorded interview with James Waits for an Australian oral response to the AIDS crisis in 1993. Thankfully directors Nikolas Bird and Eleanor Sharpe managed to get these recordings from the National Library of Australia, as Conigrave’s voice guides the documentary tremendously well and demonstrates his strong storytelling abilities that had previously been presented (mainly) in writing form.

Bird and Sharpe utilise a heavy amount of still and moving visual footage to effectively show the audience the real men behind the story in a way they have never seen before. Interviews with friends of the couple also add more to the story than had been previously told, while brief dramatisations complete the stylistic choices that the documentarians used to tell the story. 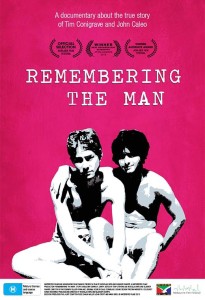 There is a slight discomfort in the way in which these dramatisations play out, a debatably intentional effect. The actors are uncomfortably close to the camera, mainly demonstrating the families noticeably missing from the documentary. Their dialogue is painful to hear when relating to the couple, but the effect seems a tad stilted. What does work is several filmed readings of Conigrave’s mid 1980’s Griffin Theatre Production of Soft Targets, displaying Conigrave’s strong ability as a writer with a finger on the pulse of social activism.

Remembering the Man serves as the final and missing element to the Conigrave-Caleo story. Remarkably moving, touching and poignant, it may not add too much more to the story that has already been told, but it certainly adds a much-needed layer, admirably enhancing what the audience already knows from another affecting perspective.

Remembering the Man is now playing nationally in cinemas thanks to the cinema on demand platform, TUGG Australia. It is also playing through special event screenings across the country.