Back in the Chicago compound, Allegiant returns The Divergent Series to the journey of Tris Prior (Shailene Woodley) and her boyfriend Four (Theo James).  When the last film in this series concluded, Tris had been revealed as Divergent and the folks in Chicago were invited to rejoin the rest of the world on the other side of the wall.

Previous leader of the Erudite faction, and dictator of the collective factions, Janine (Kate Winslet) is dead (killed in the previous instalment Insurgent) and Factionless leader Evelyn (Naomi Watts) and Amity leader Johanna (Octavia Spencer) are vying for leadership of the newly formed community.  Evelyn is the frontrunner, with little mercy shown to previous leadership as the new coalition looks like descending to the mob. 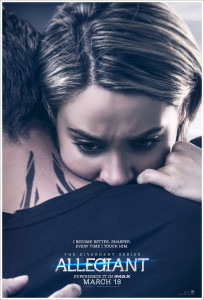 The initial lustre of freedom is wearing off, as a shambolic system starts to form. Tris and Four are keen to take up the invitation to venture beyond the wall, and along with Caleb (Ansel Elgort), Christina (Zoë Kravitz) and Peter (Miles Teller), they make a break for it.  On the other side they are confronted with a bleak reality; an uninhabited wasteland, red dust and blood red rain.  When they join the people beyond the wall, they discover that the fenced in Chicago has been a social and scientific experiment all along.  Director David (Jeff Daniels) charms Tris, but Four is unconvinced.  The experiment is not over, and the residents of Chicago are to be subjected to David’s continued trials.

For this reviewer, The Divergent Series remains far more interesting that the obvious comparison in The Hunger Games series.  The premise that humanity botched previous attempts at civilisation is plausible from the start.  Generating an enclosed Chicago as an experimental attempt at getting it right does not seem like a real stretch.  The faction system in itself is intriguing; people separated into communities based on five ideal personality traits.  This is interesting as a concept in texts (the original novels and now a film series) pitched at teens and young adults.  Considering what are the preferred characteristics of humanity, and finding the right balance within that, is potentially more fascinating than just pitting teens against a corrupt and militaristic adult dictatorship.

While this original premise is interesting, the film does not do enough to really build much on the previous films. It seems simply like a repeat of the previous stories – same story, different location – rather than an advancement of the plot.  That being said, it is still quite a slick operation and it is generally impressive.  Robert Schwentke is back in the director’s chair for this instalment; he directed Insurgent, however curiously he is not slated for the next instalment Ascendant (due for release in 2017).

Trilogies seem to have become four not three, and that is the case here as this third instalment is to be split across two films. That’s not such a bad thing, as although Allegiant is not the most glorious example of cinema, it is completely engrossing.

Allegiant is in cinemas from 14th April through Entertainment One.

Written By
Amy Taylor
More from Amy Taylor
A Pigeon Sat on a Branch Reflecting on Existence is the third...
Read More