Throughout its short history, The United States of America has long seemed to be tearing itself apart. From the Civil War, through to the civil rights movement, and on to today, when the manifestation of a country reaching the height of its own delusion and hubris is the potential election of a narcissistic psychopath as the nation’s most powerful leader. The country is beset with social, economic, and political problems. The war on drugs, the war on terror, the war on its poorest citizens through lack of access to education, healthcare, welfare, jobs, and even basic freedoms. What is the answer? Well with many thinking that it’s Trump, there couldn’t be a better time for Michael Moore to release a documentary that takes a look at some of these problems and searches for solutions.

In 2007’s Sicko, Moore examined the healthcare system in America and compared it with the non-profit universal systems of Canada, the United Kingdom, France, and Cuba. Expanding on that format in his latest film, Where to Invade Next, he casts his eye over multiple issues and travels to countries that have successfully tackled the problems that plague the US. The film opens with a fake-out jab at American foreign policy, with Moore joking that because they’ve lost every war since WWII, the Joint Chiefs of Staff don’t know what to do next and have asked for his help. Rather than a film that’s a damning indictment of US international relations, he offers to be a one man army and “invade countries populated by Caucasians whose names I can mostly pronounce, take the things we need from them, and bring them back home to the United States of America.”

In the style of a comedic travelogue, Moore heads over to Europe with a mission to “pick the flowers, not the weeds” of ideas. This is indeed overly simplistic, ignoring the many problems that the continent is currently struggling with. But it also becomes more understandable when thinking of the film’s real intended audience – Americans. The US is notoriously insular in its worldview, and the idea of ‘look at all these places doing things better than us’ isn’t one that gets much play in the American media. 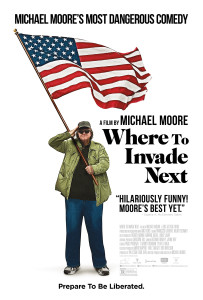 In Italy, France, Finland, Slovenia, Germany, Portugal, Norway, and Iceland, Moore looks at worker benefits, child nutrition, sexual education, the cost of university, the war on drugs, the prison system and capital punishment, the banking crisis, and women’s rights. In illuminating segments he details how these countries have pushed their nation to number one in education, or have seen a decrease in drug use through full decriminalisation. Detractors can be pedantic and point to things like unemployment rates in Italy when Moore champions workers’ legally mandated holiday time, but they can’t argue with his central thesis that there are solutions out there, and America can do better.

The film amusingly highlights much of the ridiculousness of the United States, but also takes some surprisingly emotional turns. When discussing America’s failure to really confront a past built on genocide and slavery, we see German school children learning about the Nazis and movingly talk about the responsibility they feel to the future. Likewise, a father of one of the child victims of a Norwegian mass shooter is affectingly interviewed in a segment that touches on gun control, punishment, and domestic terrorism.

The overarching theme of the film comes together in Moore’s final country – Tunisia. Here he unites the ideas of a better future coming through the power of the people, and through the enfranchisement and empowerment of women. Throughout the film he notes how giving the people the power – listening to their ideas, putting them on the boards of companies, placing their welfare and wellbeing first – has infinitely better outcomes. But he also finds that putting women at the forefront is what might ultimately save us. As the female leaders interviewed in the film put it, for women it’s we, not me, and they use words, not war.

The content of the film could easily add up to something depressing, but it’s actually surprisingly hopeful and patriotic. Moore says many of those interviewed argued these ideas originally came from America. The American dream – the ideals enshrined in the Constitution – is alive and well, just not in America. He paints himself as an increasing optimist, and says the tools to fix themselves lie inside – America can do better. It’s an idea that viewers will come away with, and that one hopes will spread through that country before it’s too late.

Where to Invade Next is in cinemas from 7th April through Madman Films.

Written By
David Nagle
More from David Nagle
Real on-screen chemistry is hard to come by. Sometimes you get two actors...
Read More