6:45am 18th April 2014. A massive chunk of glacial ice collapsed over the main climbing section of Mt Everest which triggered an avalanche. Fourteen million tonnes of ice were sent cascading down the side of the tallest mountain on earth right on top of the unfortunate folk who were climbing it. Sixteen Nepalese guides – mostly Sherpa – were killed that day, making it – at the time – the single most calamitous day in the history of the mountain. It was surpassed just over one year later in 2015 when a massive earthquake made Nepal international news in the most terrible way possible.

Writer/director Jennifer Peedom set out to make a documentary about the 2014 climbing season of Everest from the point of view of the Sherpa. Interest in the topic was sparked after the 2013 season when tensions reached a climax and there was nearly an all-out brawl between the Sherpa and climbers. This plan changed dramatically in the wake of the avalanche. In a startling turn of events, Peedom and her team were there on the day it happened and managed to get footage of both the avalanche and the immediate reactions to it.  What begins as an exploration of these ancient people; their culture, beliefs and astonishing work ethic, turns into something else entirely at the half way point when the Sherpa’s grief turns to anger.

Sherpa has been making a name for itself in the international circuit over the past year. Festival after festival – including our own Melbourne International Film Festival – has been recognising it as a stand-out work of film making. It’s easy to see why. Sherpa is the kind of documentary that not only teaches you something new, but shows you the world of Everest like never before. 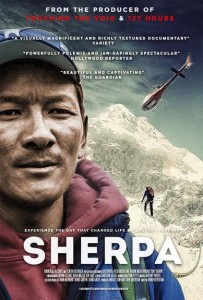 Contrary to popular belief, the term ‘Sherpa’ isn’t just a job description for the guides who help people climb the mountain. The Sherpa are actually an ethnic group from the mountainous regions of eastern Nepal who, after living there for generations, are genetically suited to climbing at high altitudes. For over fifty years they have helped climbers ascend to the top of the Himalayas in what has been described as “the most dangerous service industry in the world”.

They first gained an international reputation in 1953. And come to think of it: 1953 must have been a truly amazing year to live through. Eisenhower became the US President twenty days into the year, Stalin died in March, Queen Elizabeth II’s coronation was in June, and the Korean War ended in July. But one of the most incredible feats of that year happened in May, when the Kiwi Sir Edmund Hillary and Sherpa Tenzing Norgay became the first to reach the summit of Mt Everest. This was the moment that the general population became fixated with Everest, when mortal men climbed to the top of the world. Tenzing Norgay became a household name and the stereotype of the smiling meek Sherpa was born.

Climbing Everest has become a huge business over the years; it is the corner stone of the Nepalese economy, and companies that orchestrate the climbs can make mega bucks if they play their cards right. The clashing forces of the first and third world mean that tensions are bound to arise and this is exactly what happened in April 2014. Grief turned to anger as pay inequality, unfair compensation and mistreatment were the catalyst for the Sherpa beginning a protest which held the whole mountain in a stalemate.

As fascinating as the struggle of the Sherpa is, it’s the visuals which elevate this documentary to something quite remarkable. Cinematography by Renan Ozturk is nothing less than spectacular (Do yourself a favour: find and like Ozturk’s Instagram account. It’s incredible). Seeing the mountain range captured in high definition and projected onto the cinema screen takes one’s breath away, it is sublime in the Kantian sense of the word.

Sherpa would be worth seeing for the visuals alone, but couple it with the fact that this is a mature, highly nuanced exploration of some remarkable themes and people, and it means it has cemented itself as one of the great works about this extraordinary mountain and the crazy brave souls who climb it.

Sherpa is in cinemas from 31st March through Transmission Films.