Writer and actress Nia Vardalos is back with My Big Fat Greek Wedding 2.  There is no question that the original Greek outing was a success, nor any question that it was a good film.  Funny and warm, the original is well written, acted, directed and produced.  Nia Vardalos proved herself to be an accomplished and talented woman, both on and off the screen.  So where does she go with the second instalment?  Like other family centred comedies before it, the Greek Wedding escapade has dealt with the romance.  What comes next?  More family drama.

At the end of the last film, Toula (Nia Vardalos) and Ian (John Corbett) had married and were living blissfully next door to Toula’s parents.  Fast forward about sixteen years, and the second instalment begins.  Toula and Ian are still living next door, but now they have their teenage daughter Paris (Elena Kampouris) with them.  Toula’s father Gus (Michael Constantine) is still insistent that Greek is good, and anything that matters can be traced to Greece.  He nags the sixteen year old Paris to get a boyfriend so that she can marry and make babies.  He is also insistent that he is the direct descendant of Alexander the Great. 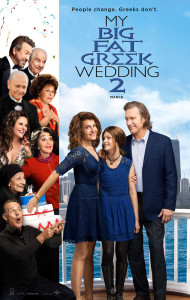 As Toula’s parents were with her, Toula is heavily involved in her daughter Paris’s life. Ian is now the principal of the high school Paris attends, and Toula volunteers at every opportunity in order to spend more time with Paris.  With so much attention from her parents and grandparents, as well as the entire extended family, Paris is a little smothered and looks to college as a means to escape her family’s clutches.

While Toula and Ian grapple with the prospect of losing Paris to a college far, far away, the rest of the family are presented with another dilemma. In his efforts to prove his lineage, Gus discovers that his marriage certificate has never been signed by a priest.  He and Maria (Lainie Kazan) have been living ‘in sin’ for all this time.  When Gus fails to take his renewed opportunity to propose to Maria seriously, she digs in her heels and refrains from any wifely ‘duties’ until she gets the proposal and wedding she wants.

My Big Fat Greek Wedding 2 is a little difficult to define, as it is essentially working within the confines of the romantic comedy.  But there is very little courtship to this story – Toula and Ian are well and truly together, as are Toula’s parents.  So the film enters into a family drama/comedy mode – if this even exists. This film really nails what being part of a big family is like, regardless of nationality or ethnicity.  While this family are Greek, the themes are relatively universal.  Expectations of marriage, children and grandchildren, the incomprehension of in-laws, strange traditions (and ‘remedies’) which no one else can really understand – it’s all part and parcel of a bustling family.

Vardalos’ talent lies in turning these family nuances and eccentricities into a warm and funny film. There really is not much plot to My Big Fat Greek Wedding 2, but that doesn’t really matter as the film is more about the bonds and ties of a family and how they work together, than it is about what actually happens to them.  The ensemble cast are fabulous, with a special mention to Bess Meisler as Mana-Yiayia.

My Big Fat Greek Wedding 2 is in cinemas from 24th March through Universal Pictures.

Written By
Amy Taylor
More from Amy Taylor
When faced with the prospect of a remake, especially when the original...
Read More