There’s a review of 2015’s Entourage by the excellent critic Mark Kermode where he tears the film to shreds in a heated fury that has become known as a ‘Kermodian Rant’. There’s a point in the review where he says “This is a most loathsome, consumerist, male dream” and follows it up with the equally sharp take-down “Utter vacuity, this foul, soul sucking, horrible vacuum of vile emptiness”. To get one admission out of the way; this reviewer hasn’t seen Entourage yet and by the ancient law of movie-going can’t pass judgement – ‘Haven’t seen it, can’t demean it’ etc. – but it was while watching Pocket Listing that I got a feeling of what Kermode was going for because Pocket Listing is terrible. Not merely bad in a bland forgettable way but the kind of bad which actually made me angry.

Set in Los Angeles around the time of the GFC, Jack Woodman (James Jurdi, who also wrote the film) is a young, successful real-estate agent with everything that money and ego can get him: fast cars, designer suits and beautiful women. He works at a real estate firm run by business tycoon Ron Glass (Burt Reynolds) and his ambitious, coke snorting son (Logan Fahey). After an incident where Jack is disgraced and loses the lifestyle with all its perks, he’s approached by a shady husband and wife (Rob Lowe & Jessica Clark) who want their multi-million dollar villa – which might look familiar because it’s the same house from The Hangover Part 3 – sold discreetly without being advertised on the market, or in real-estate terms – a ‘pocket listing’. Double-crosses and violent revenge ensues. 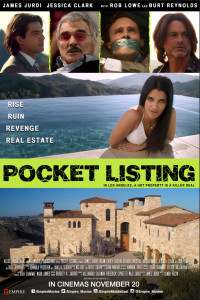 At first it seems that director Conor Allyn is setting everything up so that some message or satire can come about in the third act. All these insufferable yuppies smugly going about their insufferably yuppie ways can’t really be taken seriously, can they? The whole film plays out like a cautionary tale about the dangers of reckless capitalism which never actually gets to the ‘cautionary’ bit. Like a really vulgar joke that doesn’t reach a punch-line, Pocket Listing falls into the trap of simply showing these awful characters going about their empty little lives without following it up with any conclusion. These characters are like vicious stereotypes about the L.A. yuppie scene and yet we’re supposed to take them seriously, hope they succeed and even aspire to all their flashy cars and expensive crap. What?!

But it gets worse. This is a genuinely misogynist film. Amid some truly putrid dialogue and many leering shots of skimpily dressed women or women who simply aren’t dressed at all (including one who turns out to be an actual porn star in real life), there’s a really insidious vein of the male gaze which sits far below the level of acceptability. There are only two female characters in the whole film who get any lines of dialogue and both of them are about as well-rounded as a cardboard box. One of them gets the honour of being the main character’s assistant, and the other gets to stare seductively at him while sitting in a bikini next to a pool to show off her sizable cleavage and finely toned stomach muscles. There’s a tendency in the current Tumblr feminist mob culture to play the misogyny card at the smallest thing but in this case it’s totally deserved. Women deserve better than this.

Somehow a few big names got attracted to this project. Ken Davitian (who was Borat’s fat manager) shows up at one point, and Burt Reynolds gets two scenes and about three minutes of screen time. The big question is what the hell is Rob Lowe doing here? It’s heart breaking seeing Sam Seaborn himself appearing in tripe of this calibre. Was he having a slow month and the rent was due? Did he lose a bet? Who knows.

Pocket Listing is a rare example of a film that genuinely has bad intentions and follows through. With a mix of contemptible characters doing contemptible things and a lazy clichéd script, this is a film that easily can and should be left alone to the scrap pile of straight-to-DVD turkeys.

Pocket Listing is available on DVD/VOD from 23rd March through Bounty Films.

Written By
Simon Storey
More from Simon Storey
There’s a strange way that an opinion of a film can change...
Read More