It’s a rare movie that features the military doing something besides blowing shit up for the sake of it. It’s also rare to see a story which expertly walks a tightrope between political and military realities, and presents them as a battle between morals and ethics, rather than good guys with magic bullets and terrible stereotypical bad guys intent on the fall of western civilisation. Gavin Hood‘s Eye in the Sky is such a movie, the story of a terrorist capture which soon spirals into a targeted assassination via drone.

Guy Hibbert has written a screenplay that far from being the same old standard Us Versus Them fare, paints an all too real picture of drone warfare and the compromises made to save lives. It doesn’t dress these decisions up in chest thumping patriotism, instead choosing to present the issues without embellishment. And yes, there are Muslim terrorists in play, but there are also Muslim military officers and spies trying to stop them, which is surely a first. Essentially though, the whole operation hinges on numbers; can the estimated blast zone be reduced to save a single child from injury? Will she sell the fifteen loaves of flat bread before the terrorists leave on their suicide mission and murder and maim up to a hundred more?

This could have so easily been a dry, dull by the numbers script, something that wants to say a lot but comes across as commercial-TV-news-boring. The key here is to make the characters real – people we can relate to and perhaps empathise with.

In Britain, a woman (Helen Mirren) can’t sleep so she wanders to her office in fluffy slippers and a dressing gown. She is Colonel Katherine Powell, soon to command operation Egret, a capture-the-terrorist operation in Kenya. Lieutenant General Benson (Alan Rickman in his final film role) is having trouble buying a baby doll toy for a grandchild; he’s the liaison with the politicians who are quick to avoid responsibility and push it around like children who don’t want to eat their greens. 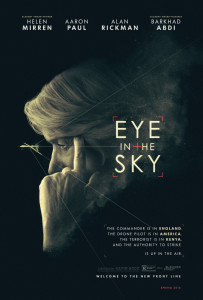 In Kenya, Alia (Aisha Takow) tries to play and learn amongst people who would punish her for the act, but her parents are quick to protect her from harm. Jama Farah (Barkhad Abdi), a spy on the ground, complains he can’t keep track of all the code words the British and Americans use.

In Las Vegas, drone pilots Steve Watts (Aaron Paul) and Carrie Gershon (Phoebe Fox) appear as standard stoic military types, but as the mission progresses their humanity shines through. When Watts finally finishes the job, it’s fifty-fifty whether he’ll be reaching for a bottle or a bullet.

In Asia, the American Secretary of State (Michael O’Keefe) is only too happy to give the go-ahead to bump off known terrorists, and there’s a momentary flicker of frustration at how the British are being so reluctant to pull the trigger, which shows the fundamental difference between the two countries. Meanwhile, British Foreign Secretary James Willett (Iain Glen) wants the operation to stop because he’s got food poisoning and a child’s life is at stake; the possibility the footage will leak to YouTube, a nod to Chelsea Manning‘s efforts with Wikileaks, is another less selfless consideration.

Characterisation and story are two thirds of the movie; Haris Zambarloukos‘ cinematography is the other, and the choice to shoot in natural colours rather than the now traditional teal and orange makes Eye in the Sky more compelling, and grounds it in reality rather than some shoot-em-up apology for a western. Editing by Megan Gill keeps the action real and the pacing is just right; too slow and it would have been a TV movie, too quick, a Hollywood action movie. South Africa, the director’s home country, doubles as Kenya, and gives the most atmospheric scenes of the movie, so detached from the electronic hum of Drone HQ, Whitehall elegance and the dull grey operations room where Powell tries workaround after workaround to make the operation a success.

In the end, what makes this such a compelling thriller is the battle between people’s subjective, personal reality versus the objectivity of the bigger picture that ironically the Drone provides – the eye in the sky of the title. It’s left to Alan Rickman to have the last word when challenged by a politician after the inevitable occurs: that soldiers are all too aware of the cost of war.

Eye in the Sky is in cinemas from 24th March through Entertainment One.

Written By
Lisa Sinclair
More from Lisa Sinclair
Learning to Drive, despite marketing to the contrary, is a light drama,...
Read More